All around me people are on missions. They have goals, ambitions and things to do and places to be. Uncle Bob has a fine political/philosophical blog and he thinks a lot. PP over at The Smallhold is up to his ears in work and prepping and doesn't have time for a blog but still manages to crank one out anyways. My respected elders, Mom and Chicken Mom are busier than all get-out, as is Gorges Grouse. BW is mapping the back roads and could prolly quit his job and go pro.

I'm one a those guys that has a place to be but never really figured out where it was that I was supposed to be. I floated through high school and graduated without knowing what I was supposed to do with my life and drove my parents crazy. About ten years later I learned that I WASN'T meant to spend my life on a forklift with menial jobs - and went back to school. It was the only time in my life that I had a definable mission and an objective.

So here I sit today, with a comfortable job (or as comfortable as it can be in a lolling economy)... my bills are paid, kid is gone, just me and the wife... and I am right smack dab back where I was when I was 18. What am I supposed to be doing? I'm dithering with the idea of going pro as a gun club stubfart - but I don't get the kick out of shooting the way I used to. Haven't been out to the club in ages. Last week my Holy Grail gun appeared on a gun shelf and I just let it go after thinking about it too much.

Flapz just bought a nice class C motorhome and I have been piddling about with the idea of getting an RV or camper and going out - but that just leaves me cold too. 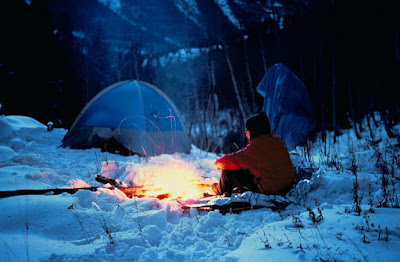 When we were kids kings.

We still have all our gear from our winter camping days. My wife and I would go tenting with snow on the ground without a second thought. We had all the gear and a dog that functioned as a reliable furnace in the fart sack on cold nights. You can't touch camping like this with a trailer or RV. I almost killed Flapz 15 years ago when we went out and it went down to -28C. I was fine but he wasn't - it was a cold, wretched night for him because he had a cheapo sleeping bag. Sometime between then and now I got old and stopped camping like this. Maybe I should go back to it?

Once out at the gun club a couple old farts down the line decided to go hunting. They were old Fudds in rubber boots, plaid, and green pants - but they were on a mission too. Three of them had a map spread out on one of the beater trucks and they schemed and planned all morning while the rest of us were shooting. Their gums flapped at 100 MPH as they planned out routes, meals and fought over campsites remembered and forgotten. I heard them and can tell you that they were every bit as happy camping like that, as Flapz is with his RV.

Now that we have no kids and live for ourselves I am looking for a direction forward. My wife is up to her ears with church stuff and is having a ball. As for me, I have my guns, my RC aircraft, and a fine motorcycle ... but are there better ways to spend my remaining years? There can always be something better, I suppose. But where do you draw the line and say: "I will spend my remaining leisure time this way, and be content...."? 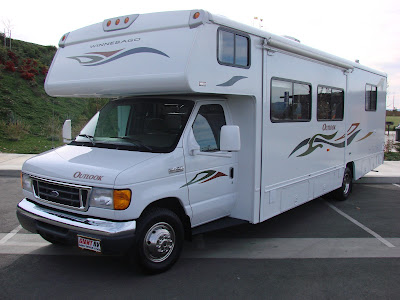 Ugh. Yeah, I can see this, out with friends, shooting the breeze
round the campfire.
But then reality intrudes. Insurance. Maintenance. Hook up fees. Storage fees.
Screw it.


Sometimes I think none of those ways are good ways to move into my senior years. Other times I think they're all good. I suppose getting to the point where ya know what works for ya is half the battle and it can be a hoot or a pain depending on the way you approach it.

Email ThisBlogThis!Share to TwitterShare to FacebookShare to Pinterest
Labels: er