It was a rough start today. I went into the chiroquack for my regular torture session for my back and I can handle that - but then I had to tell him to be careful of my buggered up knee.

That was a mistake.

The demented sonofabitch grabbed me by the foot, yarded on my leg - and pronounced that he had 'adjusted' my knee. I had filled my shorts. GAH! I marvel at my stupidity - I pay this guy $51.00 to beat me up for ten minutes. Pete Forester, Gorges Grouse and half the internet will do that for free, HAR HAR HAR!

Afterward I left the doctors and pulled into a snow dusted public park to catch my breath, make some phone calls and plan my day... when I was visited by one of these cute little buggers: 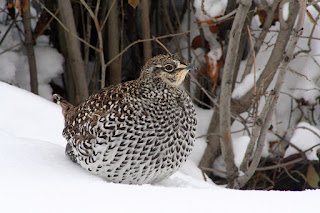 No, that isn't a Gorges Grouse, it's a ruffed grouse!

This fat little hen bobbed and scooted around my truck with her feet going and head bobbing at 100 MPH. They are comical creatures to watch - and good eating!

I've always had problems with them. You can't hunt them with a 12 gauge because if you hit them when they are too close you blow them up. If you let them get too far out when ya pull the trigger, you risk maiming and losing the bird. I went to a 20 guage hoping to minimize the amount of lead in the air - but to no avail. For all intents and purposes I can't tell the difference between a 12 and a 20 guage in the field. It ticks me off because I shelled out 1300 bucks on a side by each shottie specifically for these birds. If I decide to pursue them again I think I will skip the 28 guage and go right down to a .410.

This is the hell of hunting Ruffies - they're so damn dumb you could probably get close enough to the dumber ones and knock them over with a 9 iron. In Alberta you will get black listed at the country club for shooting at a sitting bird - it just isn't sportsmanlike. I have no problem with that, if the critter gets the best of me I have no problem with him getting away so long as he gets away clean. But I have (or maybe I should say - HAD) the sportsman's reflexes with the shottie honed on the trap and skeet range. In those games you have to be fast and break the clays with an optimal sight picture - and with only seconds to act you have to consciously slow yourself down and let a real flesh and blood bird put distance between you and it - or you blast him to smithereens with the bigger guage guns. I would hope that the dimunitive .410 shot shell would allow me to shoot at the normal speeds I'm trained for, and optimize the bird's chances if I blow my shot.

The .410 is NOT a good gun for kids or novices. A lot of people
buy them thinking new shooters won't
be intimidated by the recoil - but fail to realize
that the small shot payloads result in more misses - especially for novices.
The .410 is an expert's gun - and also finds favour with the old stubfart that is out
for fun more than anything else.


I would LOVE a .410 with exposed hammers like the one in the pic but if memory serves (and sometimes, rarely, it does) only CZ is making one and maybe a handful of custom makers. Hunting them is the sport of kings and when you get old and stupid mature and wise, just getting out after them is a reward enough. When it comes to hunting Ruffies, my advise is to go SMALL...or go home.
Posted by Glen Filthie at 14:28