I was exchanging some friendly insults with the intrepid explorer/blogger by email and the discussion turned to road trips - on which he was an expert. His recommendation was the beautiful Highwood Pass down in Kananaskis Country - some of Alberta's finest real estate. 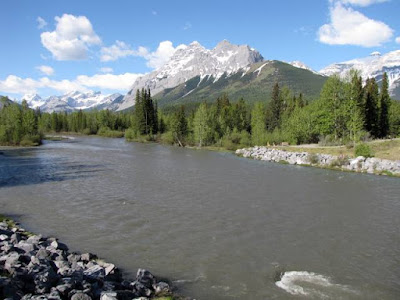 The last time I was down that way we were kids. Early 90's? Late 80's? Gawd, we had NO money back then and even a family camping trip seriously hammered the family finances - but we went anyway. I was driving a 1988 Hyundoo shit box with a phlegmatic 3 and a half cylinder engine. (I shouldn't bitch - that little car ran like a Swiss watch for us kids and treated us well). With all our gear stuffed in it we went to Eaue Claire a couple times.

I will always remember it. We were at a gas station down the road and fuelling up The wife was in the store with the kid, when a couple rich kids pulled in on a couple crotch rockets. My old beater of a bike had finally croaked that summer and we couldn't afford a replacement - and these two kids were driving the latest and greatest from Ducati. They had all the leathers, the bikes gleamed ... and I was hauling my family around in a little econobox. How I envied them! What was down that road? Where did highway 40 go...? I coulda looked at a map ... but standing out there, looking at those bikes... how I wished I were one of them with that adventure right in front of me with the wind in my face... and I swore that one day, I would buy a crotch rocket and do that road the same way those young fellas did.

But the summers came and went. I went back to school and then went back to work. We bought a house and were poverty stricken again in massive debt. We never really had money because we saved, always, we saved. More years went by. My daughter went nuts and left home, we got a dog. When she passed we got two more and some time during all that - I turned into an old fart. I don't think my fat arse would ride well on a Ducati Hyperstrad, or a Motard. I might be able to handle a Retard maybe, HAR HAR HAR! 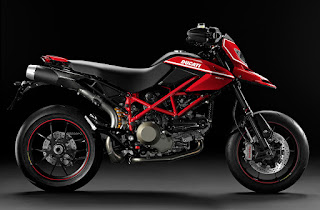 Just looking at it makes my ass and back hurt.
This is a Hypermotard, apparently.


A lot of water has passed under the bridge since that hot August day back in the 90's. Today I am driving a heavy cruiser and a road like that is small potatoes for a mile-hungry beast like mine.  It will be a casual day trip though, rather than a pulse pounding, adrenaline fuelled ride that I had originally envisioned. Those kids I saw on the Ducatis back then are probably either dead or driving Lotus sports cars now.

The wife has been informed about the next road trip, and I have some studying to do. Accomodations, and all that rot. Thanks, BW, for the kick in the butt I needed to blow some dust of the old brain box during these winter blahs, and reminding me of distant roads long forgotten!

This is going to be a good trip.
Posted by Glen Filthie at 13:07