Glad ya could join us!

Today Uncle Bob gathered up all the retards, rejects and deplorables and loaded us onto the school's Shart Bus for a field trip out to the Rod N' Gun Club where I put on a Shit Show & Tell - with the finest rifle known to man - the Almighty M14! Pardon me, boys, whilst I shovel the benches out. Old Jim will do it but he's in his 70's and he does too much work around here as it is. I'll be finished in a tick! 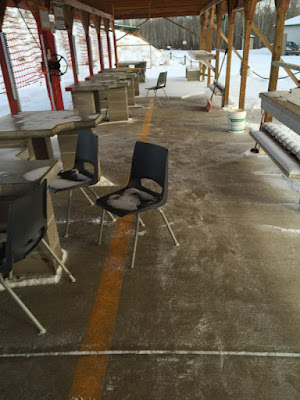 If I shovel it, then Old Jim doesn't have to...

The M14 (or, in this case, the civilian M1A) was designed by God and by Mr. Garand - he of the M1 Garand fame. Pretty much, it's a scaled down M1 that fires the 7.62 NATO round, and is shot by only the finest, most manly marksmen like Yours Truly! M14 shooters are almost always more ruggedly handsome and charming shooters - unlike slobs like Wirecutter, Uncle Bob, and Quartermain who are only allowed to shoot AR15's - under adult supervision of course....  GAH! What is that unconscionable, fetid STINK that's suddenly started to blow across my blog??? Who opened up??? Good GAWD....!!! Stop that laughing, damn you all!!! Somebody has squishy pants around here!!!

Okay. Alright, gawddammitalltohell! I'll clear the air: for target shooting and most other disciplines - the AR15 is a better gun. It's a modular design and the mild recoil of the 5.56 NATO standard chambering is a better bet out to 600 yards. There - I said it, alright? The taste of turd is upon my lips in doing so! Ahem! 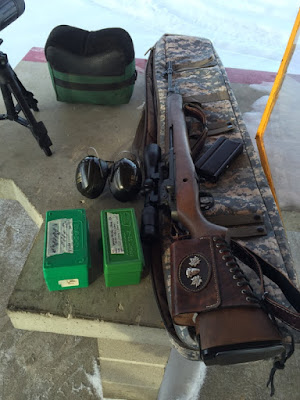 With that unpleasantness out of the way -
the M14 is a "cult gun". If you are susceptible to nostalgia
and romance as I am, these classic guns may be for you.

The average chit house M14 or M1A should do around 1.25 ~ 1.75" groups off the bench at 100. As you can see here my set up isn't optimal. My shooting bags were frozen solid because they're always in the back of the truck. Not shown is the gallon sized Big Gulp coffee I drank before the shoot. For serious accuracy testing you need everything - the proper bags, the optics (16X at a minimum), close to room temperatures, no wind, etc etc. Here in the real world - we have enough for an evaluation that will be good enough for gubbermint work and the girls Bob goes out with.

If you're gonna reload for the M14 as I do - THIS IS THE PLACE TO START. You can prolly finish there too. To give you an idea of how well this guy knows his stuff: somewhere in there he is gonna tell you that THE load for the M14 is a 168 grain hollow point boat tail match bullet, sitting on 41.5 grains IMR 4895 - preferably in Lake City milsurp brass. He will tell you that will produce 2600 ~2700 FPS on the chronograph. If your gun won't shoot that, it won't shoot anything. In my real world testing, this load produces almost exactly 2650 feet per second on the button on the chrony - exactly where we want to be. Below you can see some targets I shot and the bottom one - the load just described - turned in groups pushing 1/2" MOA. Younger eyes and steadier nerves would do better, of course. 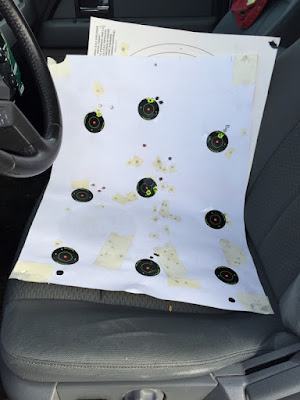 Those two 'flyers' above the centre target are sighter/fowler
shots. The rest are all three shot groups
with incrementally increasing charges of gunpowder.
The centre target bottom is my standard target load: 168 gr. HPBT's sitting on
41.5 gr. of H4895.
Glen Zediger (and, of course, Glen Filthie) know their shit!


Today I was trying to see if my beloved Nosler Ballistic Tip bullets would shine in the M14. They didn't. Groups ran from about 1.00 ~1.5".  The match load I brewed at the bottom came in at 0.665". That is respectable for a chit house garden variety m14 match rifle. A blown and tweaked match gas gun will do about half that in the hands of a competition shooter - which lets me out by a healthy margin. But the Nosler BT bullets that shone so proudly in my previous guns were only fair in this one. They did about 1 inch to about 1-1/4" on average, I shat the bed on one group that opened up to about 1.5". I would use this load for hunting but I would keep the range close. Bolt guns will fire their bullets at close to 2900 FPS or even 3000... while my gas gun is down around 2600. Long shots would be an unsporting proposition for a gun like this; when you shoot at game you want to wallop them and put them down with as much authority and finality you can. Since I don't shoot long range and will turn my nose up at marginal shots - this will do just fine for me. All I need out of a rifle is about 200 yards. Stealth will trump marksmanship hands down in the hunting field. Get close, put them down with one - that is what the game is all about.

What I really want is a game bullet that will perform like a match bullet... and I'll do more experimenting with that. About all I accomplished here was proving that the Nosler BT may not be the best bullet for the job - and that more load development is necessary.

For more info on the M14 these guys are the greatest. (What in hell is a 'Geedunk' anyways?)

That's pretty much my day summed up. Now I'm off on Dog Patrol - the rest of you: keep drinkin' stinkin' and shooting! And fill those score cards out honestly!

Filthie is watching you!