Getting Old And Stupid Gracefully


Yesterday we went out and did some last minute Christmas shopping. I don't sweat Christmas anymore - it's money or gift cards and then a bunch of stupid little stuff and knick-knacks. Pop, for example, gets a gift card for home despot, and then a small bag of pistachios, maybe a gag gift or two and some other crap to put under the tree. Mom will get a gift card to the greenhouse and girly stuff. I don't give a shit about traditional Christmas because - quite frankly, nobody gives a shit about tradition anymore. Why should I? This is the Spirit Of Christmases Yet To Come - here at last. Maybe I am just getting old. Hell - I AM old. It must have happened last night while I was sleeping!

Yesterday on the road some old geezer in a big F250 got lost and was driving on the main drag at about 1/3 the posted speed limit - taking up both lanes. Traffic stacked up behind him and he drove like that for a bit before he kinda-sorta picked a lane and left us enough room to get past. I dunno if he was drunk, stupid or just old - but I don't like driving in proximity to idiots like that. If I were King Of Canada I would have shredded his license on the spot for that. There's no excuse for that level of cluelessness and getting him off the road would be an act of civic responsibility. My wife sighed and said to expect more of that fairly quickly - the Baby Boomers are going to get old, stupid and infirm en masse in the next 10 years - all in one big gulp! Can you imagine dozens of idiots like that on the road at a time? It is going to be road kill carnage! 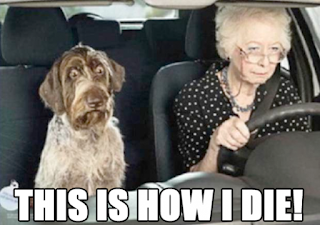 I ran afoul of the seniors all day yesterday. At the liquor store I had a senior's moment. When I go to the liquor store I get distracted easily and my ADS red lines. I was at the checkout ogling the little gizmos and drinklets at Wine & Beyond - and totally oblivious to my surroundings - the wife and I butted in line in front of this big tall kid who was too polite to say anything. The grey haired old bitch in front of us with the bad haircut had a bird! "Excuse me," the old cankle bitched, " But you just cut in line in front of that man...!!!"

I turned around and the kid was grinning from ear to ear - and I almost died of embarrassment! I told him I was so sorry and insisted he go first - and he wasn't bent out of shape about it at all. "It's like being a kid in a candy store, isn't it?" he chuckled. I gave the old bitch a sheepish grin and she just glared back at me and left with her stuff in a huff! That'll learn ya, Filthie - ya stupid old bastard!!! HAR HAR HAR! That kid....that man...was a real gentleman.

When I got home I sighed with relief. I hate shopping. Before I went down to the dungeon to finish some reloading I opened up the computer to cruise the blogs and found a gem of a post by a grumpy old man even meaner and dumber than I am! When I was a kid, ya found some dog shit, ya put it in a paper bag - and then set on fire on some grumpy old bastard's door step, rang the door bell and ran away. I did the same thing on that grumpster's blog in the comments ...  and today he's chimping out in rage! HAR HAR HAR! (Apparently Canadians aren't supposed to have opinions about America, Christians all suck, and %$#&*!@#!!!!!). 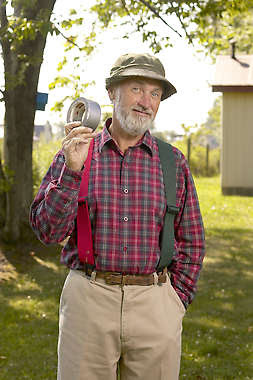 Ya can't stay young but ya can always stay immature...!!!


My wife's parents got really old and stupid like that old codger. I shouldna trolled him I suppose. My parents are going that way too and make me crazy. But some people seem to dodge that bullet. Gorges Grouse is always up to something and maintains a steadfast sense of humour. He can work around sharp tools all day long and ya don't have to give him a second thought because he still has all his marbles.  Mom and Chicken Mom are always busy with something or other and stay active and engaged. Getting old is something new to me - I'm in my early 50's - and the more I see of this dreadful aging game, the more important I think it becomes to keep moving, stay busy and interested in things.

The wife is gonna shoot me, but I am cutting church today. I have a warmer day in store, and an M14 I haven't shot in months.  If anybody needs me today, you're SOL because I am goofing off at the range ...

Respect your elders if ya can, and if ya can't try to be nice to them! With that spirit in mind: Hope your head gets better, Rat!