Philosophical Flatulence: Why Your Country Is In Decline

I discovered the so-called Manosphere probably around ten years ago. One of the first men I ran across was Captain Capitalism. It was a new medium where the hag squads, the scolds and the politically correct were told to STFU and made to do it if they got stupid about it. They may have ruled in the media, in the courts and in the workplace... but in the 'Sphere - they were irrelevant.

I liked Aaron because his advice to younger men faced with a politically correct new world - where they would be offensive to everyone just by breathing, and discriminated against - was fairly good: Keep your chin up. Stay in shape. Don't take the shabby treatment of social justice warriors personally. Don't be stupid with your money. Always save. Do what ya can - but enjoy the decline. It's his signature buzz phrase. He even wrote a book about it, apparently. Apparently his book has a new cover. 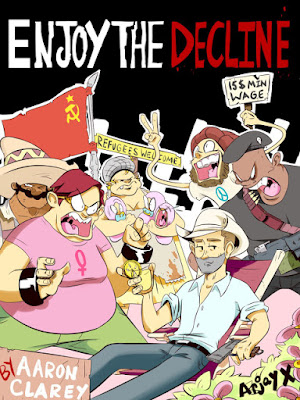 Okay, I laughed when I saw that...

I was so impressed I left a comment on his blog about this. It was tongue in cheek: "That, kid, is a fuggin DISGRACE! A target rich environment, ya got yer heater right in your hand, you're getting mobbed by vibrants and diversants - and you're just lying in the chair???!!! Hell's bells! If that were me - the dyke would have two in the chest and one in the pan faster n' you could think about it! The beaner would get two, and the greasy hipster would get two - one for each knee cap! Mag drop, rack n' tap - and all 7 of the next mag would go into the vibrant black panther because they are tougher game and ya gotta bust them up a little bit to kill them.." And, by Godfrey, all that would be done with a St. Moses 1911 chambered in God's calibre!!!! HAR HAR HAR!

It was meant as a lame joke to the Captain, I told him I didn't expect him to post it because he was a pussy and some of what I said might be in bad taste and a thought crime. Sadly, this is what passes for humour among bitter and grouchy old stubfarts - and it's not for everyone.

But... then I thunk about it a bit more. Was all that too over the top and far fetched? Okay, maybe cutting loose with the .45 on baying mobs of marginal, stupid people was... but why ARE we taking shit off these people?

I can speak for all conservatives on this: we've been nice. We've bent over backward trying to make sure everyone gets a fair shake. We have let countless insults, provocations, and attacks go by rather than hurt somebody's feelings by defending ourselves. All we have to show for it is more shit and abuse getting thrown at us. It was unavoidable too - it can be argued that for awhile, the best thing to do would be to sit back, keep your head down and wait for the morons to burn the nation to the ground - then get serious about building a future. The problem is that if we let the morons burn the house down, we will almost certainly burn with them. We will be the ones expected to clean up the mess and pay for it afterward too. Where's the win in all that?

In my mid 20's I realized that if I didn't want to end up in poverty I would have to fight tooth and nail for what I wanted. I won and lost battles over the years and I will tell you this about that - some victories weren't worth it, and some losses have left scars. That process has taught me a few things: if you cop out, you will be at the mercy of somebody that didn't. You deserve and get what you tolerate.

For me - I think it's time to put the drink down, get off the couch, and put up my dukes. I've felt that way for a long time now. You can enjoy the decline if you're so inclined but that goes against my grain. I think I shall defy it and I'll take my lumps with pride.
Posted by Glen Filthie at 05:19