Some Embers Still Glowing Under The Ash And Ruin?

Years ago - I was still just a kid - we still had some real journalism going on. Those guys would fight each other to the death for The Big Scoop - and anyone that got in their way. They were the kind of people that modern protestors and activists dream about being - asking the questions that no one else would, actually speaking truth to power. Often they took big risks to do it.

Our media started to fall in the 80's. Rather than journalists vying with each other for the Big Scoop - they got old, retired and pensioned off - and replaced with younger 'talent' that would work together to fabricate the news. Unca Bob has written some interesting tidbits on it - he was in the industry as it flushed itself down the toilet. The idea of 'fake news' is a horrifying new concept to people like my mother and her old biddies and bints - but anyone with a streak of conservativism has seen fake nooz churned out by the mainstream media for decades now.

My mother was your typical 60's liberal dingbat. Today she's a fat old liberal moonbat. As a tot I was raised on comic books like Sgt. Rock and thought military men walked on water. Today I am a fat old alt-right deplorable that thinks military men walk on water, and I read and draw inspiration from crap written by guys like Unca Bob and Gorges Grouse. Time hasn't improve me any either! :)

I will always remember it. Mom always had a subscription to TIME and I always read it, even as a little one. Started reading it in Grade 1 and by Grade 2 I had a chit house view of global conflict and politics. Once I read an article where the Jar Heads had cornered a particularly nasty NVA company of rogues in Viet Nam - and cut them to pieces like they deserved. The locals decapitated one of the corpses and pasted the head on an American tank. I saw that and exclaimed "Mom!!!! MOOOOOM!!! I wanna go to Viet Nam....!!!" The poor woman had a kiniption. She tore the magazine out of my hands and forbade me from reading it 'until I grew up'. I had to furtively steal copies of TIME to read for a good while after that.

Fast forward a decade and a bit. When I was 18 I went out to the North Cooking Lake Store to get our mail and came back with the latest edition of TIME. Right up front was a bold new story about how senile Ronald Reagan was, and how the addled old bastard was gonna start WW3 with nukes. I snorted with disgust - and threw it in the garbage. When Mom saw it in the trash she had a bird! "Why would you do that?" she screeched, "I haven't had a chance to read it yet!!!" And of course I told her the publication was full of shit and that's why it went in the garbage - where it belonged.

I think that is when I got cut out of the family will.

I may be mistaken but I don't think even Mom reads TIME magazine anymore. I'm certainly not going to waste time - much less money - on paying somebody to make stupid opinions for me. But I did see this little ember glowing in the cold, dead ash heap that the formerly great publication had become. 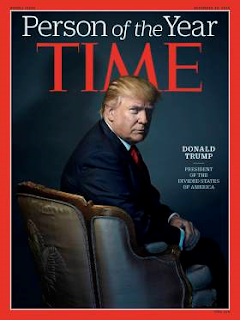 If they have any readers left...their heads probably all exploded.
Is this a last ditch attempt at integrity?
Is it too little... too late?

I would love to see a meaningful, worthy media come back again. I've tried some conservative media outlets that have a blatant conservative bias and even though I am conservative - I don't want my opinions reflected back at me - I'm smarter than that. I want the facts I need to make my own judgements. Most rational adults would.

We need a media that asks Donald Trump the tough questions and the right questions. How do ya intend to back up 4 decades of immigration mismanagement, Mr. Trump? How do ya propose to end 6 decades of fiscal mismanagement, Mr. Trump? Similarly, they have to ask the same tough questions of idiots like Obama and Hillary. Why didn't either of you drain that swamp? What about your involvement with the pedos of pizzagate? They need to ask the power brokers the questions the guy on the street would and present them as they got them - without regard to the hurt feelings of the snow flakes, and the anger of the elites or popular opinion. In the real world, what you don't know CAN hurt you, and we need to see our world as clearly and objectively as possible.

Trump is unquestionably the Person Of The Year. I am pleasantly shocked that TIME has had the courage to acknowledge that. I hope they make it a trend. Didn't read the story - didn't want to spoil the idea that maybe - at last... at least one mainstream media outlet - has grown a brain.
Posted by Glen Filthie at 13:09