The Spirit Of Christmas Yet To Come


The best rendition I ever saw of A Christmas Carol was in grade two on an old reel to reel projector and was in black and white... The original must have been from the 40's. It was pretty damn creepy for a kid that age too! It made all us kids think. 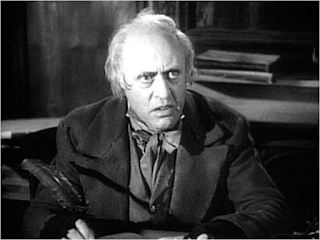 About the only thing Dickens got wrong was the cast of characters and maybe the ending. Instead of a grumpy old white guy, Scrooge should have been a modern young woman. And whereas grumpy old Scrooge reformed and mended his evil ways... the modern young woman has not. Welcome the Spirit Of Christmas Yet To Come, Chickie! We're here!!! 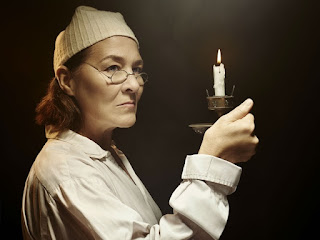 Spending this Christmas with a cat, are ya?

When I was a kid Christmas was with the Grandparents, Mom and Dad and us kids. Cousins, aunts, and uncles too. This Christmas how many families are going to have all that? The predations of no fault divorce, mainstreamed homosexuality and sexual degeneracy, and feminism gave taken their toll. There are going to be a lot of 'alternative Christmases' going on out there I suppose. Will they be as much fun 20 years from now? We're all gonna find out, and no bones about it.

The last "family" Christmas I was at was with the in laws. It was us, them, our kid and my brother in law's family. His father in law was there with his wife and two ex-wives. The old man was a professor over at the university and as a liberal academic - my idiot in laws fawned over him like he was royalty. Talk over supper was a scholarly lecture about how Christianity sucks, followed by a lecture by my brother in law's wife about the lofty ideals of feminism. That was followed by my brother in law preaching about socialism and liberal politics. I wanted to just drop my fork and leave. These people utterly revolted me. Haven't seen them since, don't want to see any of them again. I heard the brother in law is divorced now - I know, right? Who woulda thunk it?  Unfortunately depraved minds like that went to work on my daughter and I've related the result in these pages before. Daughter or no, I am not ever going to spend Christmas with a couple of sullen queers that are angry at the world and at men. Misery like that is contagious and Christmas should be a happy time. Or at least, not unhappy.

I think it's pretty much obvious now. Our women have lost their fuggin minds. Hillary Clinton was claiming that she lost the election because of misogyny. Now she's blaming Putin and wants war with Russia. Here in Canada, the lesbian premiere of Morontario has gutted her province's finances and economy. Her environmental initiatives have driven energy costs through the roof too. In Alberta, our stunned cnut of a premiere is raising carbon taxes on the oil patch which has already been devastated in an oil bust.  That kind of "stupid" is going on right down to the family level everywhere as our would-be matriarchs come apart at the seams...and our families with them. Christmas Dinner is going to be different for a lot of folks this year, especially for a lot of us eeeeeevil conservative white males. If there's one thing you should have learned this year, fellas - is that you are not obligated to be a punching bag for the family's social justice warriors, sexual degenerates, liberals and femcnuts. Sometimes the best thing for everyone is for you to just walk away. It is not unreasonable for you to ask for a peaceful meal and good cheer during the Christmas holidays, and only a shrew or a cretin would try and deprive you of it.

So I'm sitting here with what's left of my family in 2016 and all I can do is shake my head and smile. Christmas this year is going to be small, low key - and peaceful. The wife wants to attend a few church functions, and after that we are on our own. I thank God Almighty my marriage is still intact, that my wife is warm, caring - and sane. But it's all to the good - we are moving forward.

Christmas can be a tough time for us old white guys that have seen their families re-defined as women redefine themselves contrary to common sense, 250,000 years of evolution and even their own biology. Some of us have been re-defined right out of our own families and homes. Christmas used to be about family and now that families have changed - the holiday has to as well. Go to the rod n' gun club. Or take a shot at winter camping. Do something that makes you happy, and don't dwell on others that have made bad decisions for themselves and for you. Christmas is definitely NOT about them. Be of good cheer, respect yourself and your Maker, and have a very Merry Christmas. 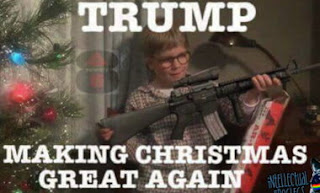 I saw this one and laughed.
Where was Trump when I was a kid?
:)
Is this the new Spirit Of Christmas Yet To Come?
Where St. Nick St. Filthie comes down
the chimney with a hearty HAR HAR HAR! and
leaves weapons and ammo for the good kids?
One can only hope.