Thoughts From The Reloading Bench 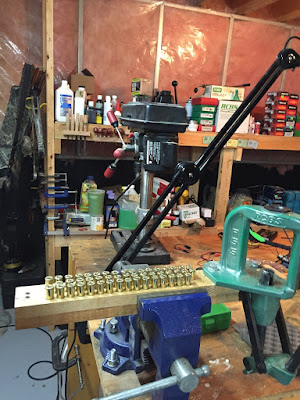 Hibernating in the man cave tonight...

This morning I got up early, bright eyed and bushy tailed. I went downstairs and ate 3 bowls of Wheaties, garnished with 4 leaf clovers. Then I shoved four Clydesdale horse shoes up my can - and at lunch time dipped into the indoor range to do some spraying and praying.

I went in and the place was pretty much dead - just the usual old geezers and some of my fellow rejects. Awesome: I don't like maddening crowds when I shoot. I pulled the .22 auto first and went to work. As did the Wheaties and the horse shoes - the gun slipped into my hands like it was born there, I was a study in control and concentration and I banged off 19 and dumped the lot nicely into the black. On number twenty - I took aim down those rock steady iron sights and started my carefully controlled trigger squeeze... and waited for the break... steady, Filthie.....steeeeeaaaadddeeeee.....

I looked over in the next bay and sure as chit, BW was standing there with a surprised, sheepish expression on his face and trying to look innocent like it wasn't him that cut the cheese - yeah right, like anyone else would chit themselves in public like that! Nice try, chump! I shook my head in utter disgust (why, if I smelled that rotten I would be ashamed of myself!) and took aim again. 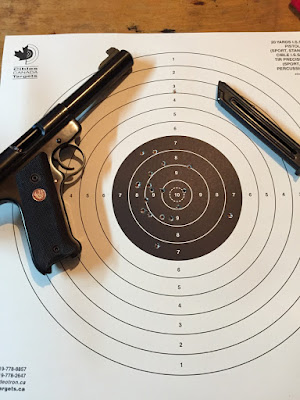 And threw my last shot into the 3 ring at 12:00 o'clock
GODDAMMITALLTOHELL!!!

I put my tack driving Ruger away and broke out the Redhawk in .45 Colt. I am not a wheelgun man but this thing had been showing promise and I know it wants to shoot! Most guns in .45 Colt do! I scowled at the vagrants and rubby-dubs as if to dare any of them to try anything foolish... and they all pretended not to notice. BW was back to throwing hand grenades down range, Uncle Bob took out a fluorescent light with that sweet little Sig of his, and Gorges Grouse was studiously loading his front stuffing black powder gun. Hmpppffffff! Damn right you'll behave yourselves, you wretched wretches! The coast was clear - so I went to work with the .45. 15 shots went down range the same as they did with the .22 - all landing well in the black! I was back on my roll! Don't get sloppy, Filthie! Squeeeeeeeeeeeze the trigger......

JEEZ LOUISE! WL's been eating health food again!!! Then Pete Forester cut loose on the other side of the firing line with a fluttering blast that blew my hair back - and I'm bald...! GAHHHH...! I retched and choked and tried not to laugh as I sprayed my last five all over hell's half acre... a look of dismay came over Quartermain's face as he chat his drawers. I split a gut laughing - and my last shot went wild.

It clipped the range officer who didn't take kindly too it and he called the cops... and now I have 30 days in the poke to think about my dismal marksmanship skills and my childish sense of humour! Think I'll use the time to contemplate accurizing the Redhawk and thinking of other ways to improve my shooting. 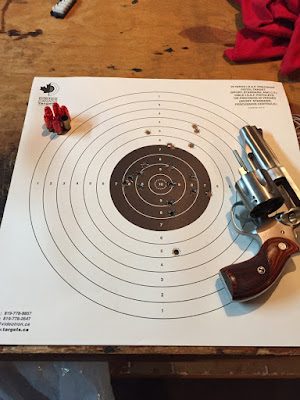 Filthie's Accuracy Tip No. 1: A little bit of Bean-O
sometimes goes a long way to keeping those groups
good and tight.
Prevents other things from opening up that shouldn't, too...

Still and all that is better shooting than I've done in awhile. Little victories fellas.

May you have a few this weekend yourselves!  ;)