Cretins And Their Coffee

I heard the Yanks were gonna boycott Starbucks when their CEO announced that in defiance of Donald Trump and his immigration bans - he was gonna hire 10,000 pakies, mud flaps and rag heads instead of Americans.(Good luck with that Mister - most of those guys have problems with flush toilets so it's anybody's guess how they'll do with coffee or espresso machines. HAR HAR HAR!!!)

As a Canadian, I am hopping mad at Tim Horton's! I figure I've drunk enough coffee in the last three weeks that the least those turdies could do would be to give me a moderately priced high performance sports car for supporting and patronizing their business. They have a game where ya roll up the rim on the empty cup to win valuable cash n' prizes.

So far I haven't won a cookie, or a doughnut or even another coffee! How much of this swill am I supposed to drink before I win a treat???

Then I get this rude text on the cell phone: BW Bandy is stuffing his face with donuts and having his first coffee in years at the Tim's in East Overshoe - and he wins the first time and has to rub salt in my wounds by sending me a pic of it! 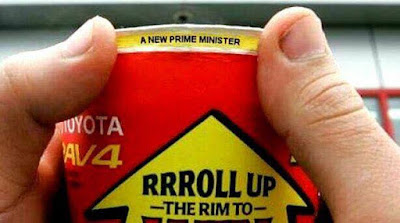 Oh sure! I can't even win a damned cookie and BW
wins a nation!
Tell me how THAT works!!!

Screw it. From here on out, I drink out of the toilet or a jerry can the same way Uncle Bob and Quartermain do - and Tim Hortons can take a flying leap at a rolling donut.
Posted by Glen Filthie at 15:47