When I was a kid we caught mice in those standard Victor mouse traps. They were fun to play with too: GI Joe would spill all his classified mission directives when tortured with them and Johnny West turned into a stooly pigeon too! All the Action Figures did! (And of course it was all fun n' games until you got your own finger snapped in the damn things). 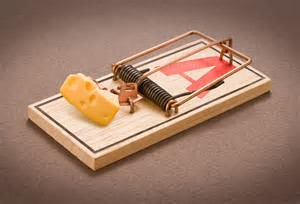 Back in the good ol' days an action figure worth his salt
could take torture sessions with these all day long.
I suspect the cheap toys today would be gone with one snap.

Time moved on and I grew up (or at least my body did) but I still found myself fascinated by these things. When we moved to the farm Pop went high tech when he bought one that would snap up to 8 mice in a night. It was a flat cylindrical affair where the rodent put his head in to get at the bait and then got snapped. When we got up to do our chores in the morning we would both pause to cackle like morons at the poor vermin we killed with these idiotic things, HAR HAR HAR!

Mom never really adapted to the farm and one day got so disgusted with our antics, that she threw all the conventional mouse traps away and bought these more humane 'live capture' rigs designed not to kill the little bastards - just trap them so that bed wetting pissers and moaners wouldn't have to shed any tears over dead mice in the barn. Pop and I were disgusted, but we set the damned things out anyways because after all - the goal was to get the mice out of the shop and the barn - and not to entertain ourselves by killing them as inhumanely as possible.

Gotta give credit where credit is due: if mice had to die, and a progressive 'sunshine, lollipops' solution wasn't possible... a viable, but warm and fuzzy traditional solution was! 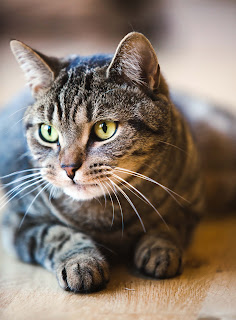 Corky was about the same colour as this bandit, but she had long hair and was as dumb as a post. She was my first cat (Pop hates cats) and I just loved her. One day we saw her in action: she had cornered a mouse on the patio and was slowly torturing it to death. When she finally killed it, she looked around, then picked it up and carried it over to the door into the house and left it there for Mom to find. Pop and I, of course, had to cackle and the HAR-HAR-HARring brought Mom out - and she lost her mud when she saw the present the cat left. A couple months later I adopted another stray female cat that Pop named Sammy - she was black as sin and she started leaving Mom "presents" too.

Mom was still a bit of a nice lady back then. We finished her off for good when one day the cats cornered a gopher in the flower garden. They could contain it but they were leery of the rodent's size and teeth - so me and the dog moved in to help - and the gopher bolted. Somehow the critter got past the cats - and the chase was on! We set up a cordon - and funnelled the critter right back toward Charlie the Dawg - and it ran right into her mouth and she put an end to him with one big CRUNCH.

"HAR HAR HAR!" Pop chortled. "Good work everyone! That was some mighty fine team work!" Then Mom came round the corner of the house and noticed her son, her dog and two cats had trampled half her flower garden. "My garden...." she said in a small, sad voice. The last straw was when Charlie dropped the dead gopher at her feet as a consolation. Something just seemed to snap in Mom that day - she's been a horrible, ghastly old bitch ever since, and Pop and I stoically weather her bitchery in brave and forlorn silence. I know my soul is as pure as the driven snow - but I can't help but feel somehow partially responsible for what happened that day. (What is that horrible stink coming over my blog?)

In any event, the matters of mice and men have resurfaced - this time on youtube. The game's changed since the days when Pop and I played it - but the sentiments and the character of the players has not.

Happy Hump Day everyone.
Posted by Glen Filthie at 06:18