John C Wright is a favourite of mine. He has a knack of cutting through the BS and is capable of superlative good writing on occasion. My family situation has made me all to familiar with people that have been educated beyond their intellects and turned their minds to mush in the process. They can no longer see the relationship between actions and consequences - when something bad happens to them it's always somebody else's fault, and it's almost always an act of hate or discrimination or bigotry. That leftist circle-jerk has been going on for a long time and probably will continue for some time to come. The horrible politically incorrect truth is that until responsible, capable white men put marginal, degenerate and stupid people in check - this will continue. For me - the jig is up. Hell, it has been for over two decades now.

Bill M-103 is the latest tempest in the teapot up here in Canada. Free speech is offensive to moslems and they are doing their damnedest to get their liberal useful fools to undermine it. Predictably, comedy and ass-hattery ensue. 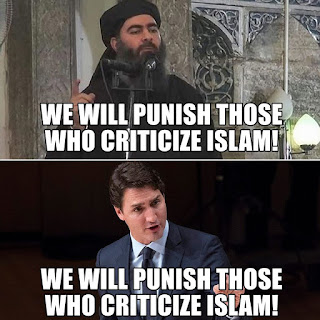 LOL. Good luck with that, junior.

I love Americans. I love their Constitution and their devotion to it. When Obama was stinking up the Oval Office with his presence and wiping his arse on the Constitution, there was no shortage of Americans willing to publicly tell that niggered idiot where to go and how to get there. When gay mulatto started arming up the alphabet soup of law enforcement agencies, Americans gunned up too, and made no secret as to why.

We handle things differently up here in Canada. Or at least, out here in Alberta. We've had an unfortunate string of liberal morons that think they can control thoughts and speech merely by making laws. Half of them come out of the judiciary. But by and large, these idiots can only make speeches and pose for photo ops as they sign meaningless scraps of paper. We The People of Canada may mutter and curse - but we generally ignore them and just keep on truckin' as we always have. The libs know they can't enforce their bullshit and their liable to get shot if they get stupid about it. They have their puppet show, we pretend to be impressed or we blatantly ignore it... and life goes on.

Out in the real world, or, at least - here in Alberta - most of us think that islam is a stupid religion practiced by violent people with ugly women and ignorant men. We see the yodelling curs screaming for the death of all joos, queers, homos etc - and we know the score and will say so amongst ourselves. And if Turdo La Doo doesn't like it - welp... we aren't all that impressed with that little faggot either. I am just laughing - that multicultural pot is coming to a roiling boil and now these idiot leftists are desperately trying to keep a lid on it! For me - as always, I'm stocking up on ammo and popcorn for when the Age Of Unreality finally ends.

In the meantime, courtesy of The Grouchy Old Cripple - we have more moslem comedy for those of you that just can't get enough of our peaceful and vibrant moslem friends!

So - that's the way it works in Canada, for what it's worth. If some liberal piece of shit like Justin Trudeau can talk trash about Christian conservatives, he can't bitch if we talk the same way about his helper monkeys.