That's what Marie Antoinette said when peasants and peons like me started whining for free food.

Yannow how some blogs have this gizmo so that you can donate money to 'em? I need one. Sheesh - I can't even afford to copy the pic and paste it on my blog! It's a shame because we could REALLY use some good dueling pistols round here. Unca Bob is mouthing off about my good buddy, George Dubya Bush and he's to big for me to beat up with my fists. Ever notice how everyone is completely on board with free speech but they lose their shit when the other guy does it? The restoration of the dueling tradition would make things real easy: sure, Bub, you can do your free speechin' all ya want - but if you mouth off at the wrong person at the wrong time you can either back up your gob honourably - or STFU, mind your manners and keep breathing and live to see another day.

Heck, that would have positive secondary effects too: shrewish women with sharp tongues and dull minds would also be stifled by angry husbands who won't want to answer for their ropey mouths, HAR HAR HAR!!! Mind you I'd probly be dead now too - with a .54 round lead ball put through my pan by some angry peasant like BW or Victor Quartermain.

Lend me some money, Unca Bob! I'll take back ALL the rotten things I've said about you! David Price was selling kits for similar swivel-breech rifles that are to die for. To the layperson it looks like he sells you all the parts and all ya gotta do is slap 'em together. Au contraire:

Disaster strikes Mike as he struggles to inlet a fine piece of curly maple...
He's been fussing with this thing all winter down in his shop.


I'm told the basic kit is around $2500.00 USD. Even the in-embellished guns are works of art and Mike will no doubt prevail and will hopefully have a range report for us soon.

As for David Price - he's quite simply the benchmark for the gun maker's art. Here are his superb 'Father & Son' rifles. 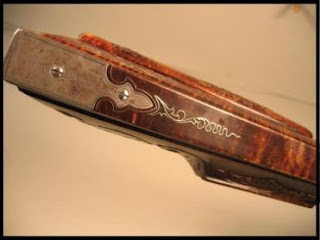 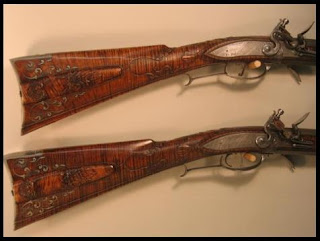 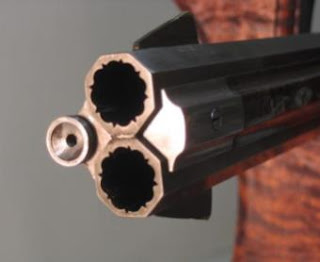 Those leaves, vines and cabbage are all wire/silver inlays. I can
sort of do it... but my work looks like it was done
by a hare-lipped retard or a gov't worker. Dave's work is
spectacularly flawless.


There's a Valhalla down in the US somewhere called 'Toad Hall' where the boys literally build flintlocks from a bar of metal and a tree branch. The 'apprentice' gun makers are old toads in their 60's and they work under the tutelage of men in their 70's. You would think a guy could make a mint selling guns like this - and a very few can - but for most of us the time investment simply isn't worth it. It's a labour of love - which is why I will probably never own one! HAR HAR HAR!

Hope yer week is off to a good start.
Posted by Glen Filthie at 15:14