Look Out Man! I Got The Bungee Blues!!!

And so another generation learns that bungees make
useful servants...
but lethal masters.

Elastic straps - or bungees, as I like to call 'em - are very dangerous tools. Prollem is that if ya ride a motorcycle and ya wanna carry a load - yer damn near stuck with the damned things. The devilish things have to be under tension in order to secure the load - but they're always too long or too short. So the Devil's Dilemma makes it's inevitable appearance: do ya do another wrap and hope ya can make 'em stretch to the anchor point? Or do ya give up?

Men don't give up. Not to bungees, not to common sense and certainly not to Satan!

Oh yeah, we'll do another wrap and stretch that damned bungee until we can just about hook it and cinch it - and then the damn thing lets go! All that potential energy converts into kinetic energy as the hook end whips around and takes your eye, or your nose or even your balls! And lord - how it HURTS! GAAAAAHHHH!!!!

Unless you want to suffer from bungee induced PTSD as I do (and now probly that kid in the GIF) - BUY A BUNCH OF BUNGEES. If ya have lots of 'em in different lengths - you should be able to make 'em work and secure and reasonable load. Small aircraft like the famous yellow Piper Cubs commonly used bungees as shock absorbers in their so-called 'Oleo' style landing gear. 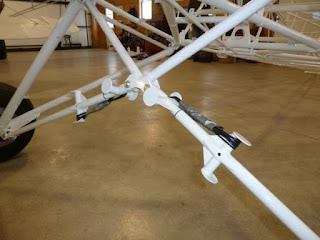 
If you have any doubts about your bungees holding a load - double them up so that they can share it.

Remember men: bungee related injuries are only funny when it happens to somebody else.
Posted by Glen Filthie at 15:30