I love March in Alberta because it's unpredictable and could run from +8C that we got yesterday - to -13C today with blowing winds and big fluffy flakes of snow. Today we went out to the roughest part of town: Centennial Park.

Centennial Park is bordered by a bunch of senior's apartments and as you can imagine, the Park is infested with them and is a hive of senior delinquency. It requires constant vigilance to maintain the peace and regular patrol and law enforcement by the Crime Fighting Super Heroes - Captain Sweatpants And His K9 Cohorts! 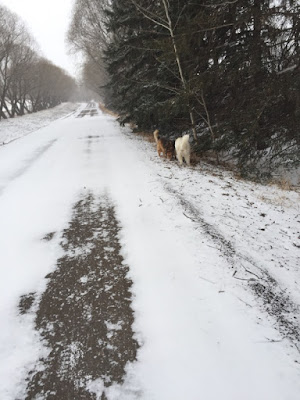 My vicious dawgs look for dead bodies in the underbrush...

It's a weird day. It's only minus 13C but the wind chill must drag that down into the -20s. Ya can't see it but there' flurries of snow going on, and the roads are covered over so nobody knows where the lanes are and half the assholes are splitting the difference and driving in the middle! We got to the Park and deployed for Dawg Patrol.

I let the dogs off leash today. Usually the roving seniors get bent about dogs off leash and one old fart always tells me that 'he's with by law enforcement, and if he catches me one more time with my dogs off leash, he'll give me a ticket!!!'. He's about 80 years old and I know he's full a shit but I always play along and grovel and snivel for mercy - and he gets off on the power trip or something. It was a safe bet he wouldn't be out today so we had the run of the place. 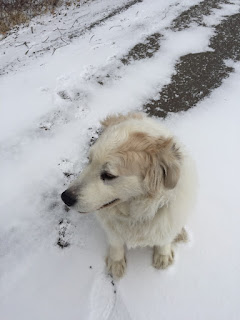 We know Mort is a dawg and not an Abominable Snow Ape
because we shaved him in the spring and it
turned out that he does not have opposable thumbs on his feet
like the rest of us.
Gah - he stinks like an old urinal though, so
he may be an ape/dawg hybrid.

Everything started out well but went to hell fast. Every year I usually slip and fall on the ice about 3 times. This year I only did it once and was hoping like hell to set a personal record. I have been walking extra careful hoping to prevent any falls until the ice melts in April. 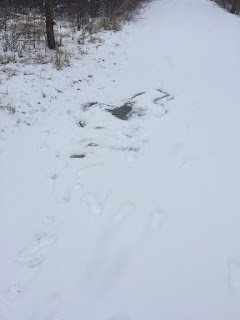 Yesterday was +8 and everything melted. Today the ice is a perfect glaze. On top of that, nice fluffy snow lowers the coefficient of friction to close to zero! I did a face plant half way around the walk and posted this so that my readers could sympathize with my plight and feel sorry for me. (The Usual Supsects are cautioned that inappropriate laughter is deeply hurtful and offensive and may result in frivolous lawsuits). "That's okay," I told myself - two falls in the spring is still pretty good! I can still set a personal record if I'm careful!" And of course, about a harfanhour later I slipped and fell on my ass again! Shit! Shit shit shit!!!!! I still have a month and a half to go so 2017 is probably going to be a write off as far as Walking And Talking And Chewing Bubble Gum is concerned. I woulda taken a pic of that too but my cell phone froze up and shut down. 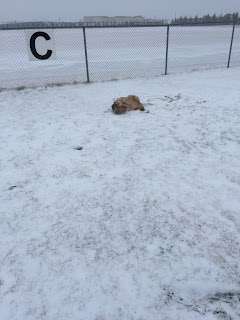 So we got back to the car and my ass was full of ice and melting snow. Of course we're driving in the wife's little RAV and what happens? The car warms up, and then the windshield goes *pop* and a big fuggin crack runs from one side of the car to the other! Grrrrrrrr!!!!! How's that for a fine 'F*** you Filthie!' from Ol' Man Winter? The wife is gonna have a bird when she sees that!

Bah! At least we got out. If I can I'll be back to open up Filthie's Saturday Speakeasy. Have yourselves a good weekend everyone.