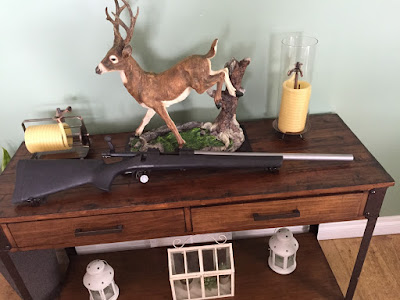 I've gotten good and thoroughly lost in Gun Geek Forest. I'm serious, I dunno which way I wanna go! Awhile back sniper rifles were all the rage and I gotta admit I never had much enthusiasm for it... but all the cool kids at my club were doing it, and they're still hard at it.

I was reading with some dismay over at Kim du Toit's blog. His wife just passed and he is de-cluttering, down sizing and preparing to move to an appropriate small apartment for the widowed senior. It's heart breaking stuff but something that's in store for all of us. In a recent post he described how he lost his chit going through his wife's cooking gear to get rid of it. I would hate for my wife to get stuck with all my ordnance and not know what to do with it.

I am keeping my Nasty Rifles, the ones that dung-eating liberals and turd brains think that only the military should have. By God, if those sumbitches ever get stupid enough to force me to use mine in anger - I'll be taking at least a dozen of them to hell with me and that's all I'm gonna say about that. The Bad Boys won't come out if everyone is nice and keeps their hands where I can see 'em. Y'all been warned.

My serious rifles though - for taking care of the insolent sportsmen and sullen stubfarts at the rod n gun club are all black powder burners now. I've shot the Retirement Rifle with smokeless loads and the new Soule Sight - and have some fussing to do. The hooded brass/case hardened front sight has interchangeable 'reticles' and I need to find one that works for my aging eyes. But preliminary shooting was very, very promising. That was using smokeless powder though... now I gotta do the same again with black powder and that's a whole new shootin' match...literally! HAR HAR HAR! 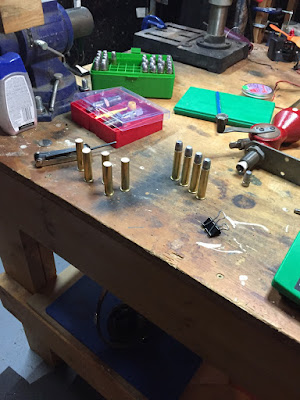 Look out! That's a 405 grain lead bullet, sitting on
70 grains of compressed black powder and a
'grease cookie' made
from bullet lube that I made m'self!

Today at coffee was awesome. My arch enemy, King Peter - was beaking off about the new .338 Lapua Magnum he just bought. Then he started flapping off about how he can now look down his long imperial nose at lesser men shooting light bullets... guys like me for instance!  'How big a bullets are ya shooting, Pete?' I asked. The knucklehead just grinned and said '300 grainers...!'

Pete was thoroughly nonplussed when I looked down my long nose at him, HAR HAR HAR!!!! My serious bullets are going to weigh in at 525 grains - I just need a warm day to melt the lead and cast them! :)

So, I suppose I should be happy at the prosepect of getting rid of a rifle I don't use, right? Problem is that once I sell it I'll just spend the money on the ones I keep! The cool kids at the club are gonna be unhappy too... not only will I be sneering down my nose at them, they will have to put up with the rancid stench of burnt black powder and the smoke too!