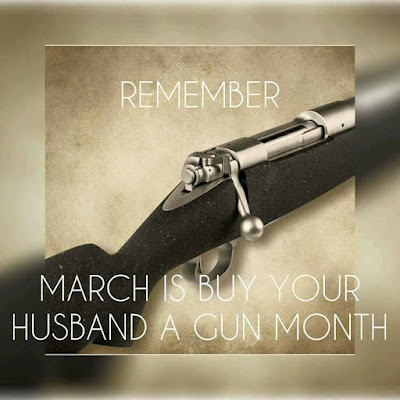 When we were kids that had just started going out in high school I told my (then) girlfriend that I would really really really like one of these:

That's a Savage 99 lever gun. I don't think they make these anymore.
I wanted on in my favourite smokeless calibre - .308

I expected her to tell me to get stuffed but she never even blinked. 'Then I'll buy you one!' she declared. I just smirked because back in the 80's, these things went for just under $400.00 beans and that was a princely sum for kids working for three bucks an hour and change.

A couple months later she pulled me aside and declared that we needed to go to Simpson Sears to buy it - she had finally gotten the money together. I couldn't believe it! I forbade it at the time, we had just started going steady and I was afraid that she would regain her senses and I would get the punt - and I would have hated to have her spend that kind of money on me under the circumstances. She was an industrious, focused little lady back then to amass such a fortune. I think we were 16 or 17 back then. And she loved me more than I knew.

Today our marriage is better than most and when I ask her to buy me a gun she tells me to get stuffed! Hmmmm. Our anniversary is coming up... I think I will buy her a mop....
Posted by Glen Filthie at 16:14