Who Is Jane Gault?


Aaaaaaahhhhh. Looks like we got the day off, boys, while the clot headed cnuts the ladies take the day off to go bitch, HAR HAR HAR!!!!


I went back to school as a mature student in 1990's. I couldn't get a decent job for love or money and the economy was in major recession. When I started there were 125 of us, and when we finished there were about 75. My marks weren't bad but they weren't stellar - about smack dab in the middle of the upper third of that year's class. At the placement centre, there were about six of what I would call 'serious, career enhancing job offers' for graduate students. Think about that for a second.

6 job opportunities. For 75 students that just sunk years and a small fortune into training themselves for a better job.

What the hell, I can't complain, the Alberta recession was in it's final few years, and there just weren't enough good jobs to go round. In any event, the disposition of those jobs was determined in fairly short order. 2 went to the only two women in our class. 3 went to the three natives. That left one job for the rest of us - which went to a white male who had the highest marks in the class. That was in 1995. Tell me all about discrimination and oppression, chickie.

In '03 I took a job with a major instrumentation and automation company. When they decided they needed an office inside sales manager, my 8 years experience meant nothing. They gave the job to a 20 something bubble gummer with a rack of fake tits, and a mouth like a trucker. At the time I thought she had maturity issues but later learned she was on anti-depressants. Had I not quit, she would have made A LOT of extra work for me and possibly a few job-related ulcers and strokes. I quit a couple weeks later and a year later I had heard that the company had gone through a mass layoff - and that my bubblegummer boss was one of the only survivors.

When I was a boy Grandma used to complain bitterly that a woman had to be twice as good as a man to be considered for and to retain the same job. Today, she only has to be half as good and we have the economy to show for it too.

I've seen the feminism induced train wrecks in marriages, in the workplace and in the family. Like everyone else, I remember the complaints of first wave feminists 40 years ago - and see the world they created today. I'm not happy with it, they're OBVIOUSLY not happy with it, and it's high time to push back. Fact is, if a woman told me she was taking the day off to protest working conditions for women today - I would fire her ass in a heartbeat. When I was a kid I would have killed for a good job and all these women can do is bitch about theirs and play office politics. 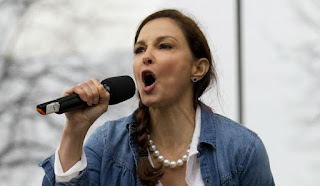 Looks like somebody's on the rag again....
Just so ya know, Corporate North America: the idea of
business is to make a buck - not create a pulpit
for diseased vaginal derelicts like this.

The way to handle women like Ashley here is simple - GET RID OF THEM. These idiots will make train wrecks of their own lives and will gleefully do the same to you, your family and your workplace if you let them. I've seen the world these shrieking skanks are making, and the wretched lives they are making for themselves... and I want no part of it. As I've related in these pages before, my daughter is a militant lesbian social justice warrior. My mother in law was a loud, domineering clueless idiot that wore the pants in her family and presumed to do it in mine. There are times I wish that I could do something to bring the family back together - but you can't appease or mollify stupidity. You can only tolerate it and if you do - ultimately, you will deserve what you get for deferring to stupid people. These people will never be happy, they'll never get what they want, and they'll never take responsibility for their own unhappiness. It will always be YOUR fault.

Ashley is a case in point - she must be a millionaire... she can do anything she wants... and all she can do is whine and bitch? A day without feminists will be a good one any way ya cut it, HAR HAR HAR!
Posted by Glen Filthie at 05:51