I have watched good companies die before. The symptoms are always the same. As the company's fortunes go into decline, the management goes into a panic. A lot of lazy slobs coagulate in management and the thought of their free ride ending fills them with dread. Others are hard working honest men with a deep emotional investment in the company. Most of them know what awaits them in a depressed economy. They start to panic. Some have heart attacks and ulcers over stuff like this and I flat out refuse to be one of them.

Then the guys further down the food chain panic too and start to revolt. They have options and won't take shit off abusive managers. Sometimes they just up and leave, and throw a hand grenade over their shoulder on the way out and hope the assholes get hit by the shrapnel. I refuse to be one of them too.

There's an internet meme where Hitler is in his bunker, demanding victories from his underlings whose battalions have already been wiped out, or could only do the bidding of their Furher through a miracle. Our sales manager is a domineering fat fwench fart sucker doing much the same by setting sales goals for us that aren't going to happen. In an exchange yesterday I told that stupid cnut that if I could work miracles and do it for free, I would work them for myself, cut him out entirely and likely as not - have him fired out of a cannon just for gits and shiggles. I am not going to cling to this job and hope that the economy miraculously heals itself, or sanity breaks out in management. I told him that if it is time to part the road between us, well, let's lawyer up and see what happens and then get on with it. In the meantime - I will do my job the same way I did it for years - the way it should be done. Part of my manager's problem is that I won't fight his battles for him and I WILL fight him personally if he wants to get stupid about it. Whatever - now our suppliers are in turmoil as buyouts and mergers go down in other countries and that may end us faster than the oil bust does. It's looking pretty bleak right now.

This week I am up at Ft. Mac in the oilsands - and this place is shutting down. Offices have been cleared out and put up for lease, sales have slowed from a torrent to a trickle, and Alberta is going bust after the boom. Former customers have been let go, or are in spending freezes and do not return calls or take visitors.

On the way up I noticed a property where every post along the barbwire fence had a hard hat nailed to it. It goes for at least a half a mile, probably more. When my job ends, I am seriously thinking of coming back up this way on pleasure rather than business - and putting my hard hat on one of those posts, to weather and bleach in the sun over the years much as my time here fades into obscurity and irrelevance. It will be a poignant affair, but a hopeful one too. It would be a good little private ceremony to mark the passing of another chapter in my life. I have close to ten years of my life tied up with this company. 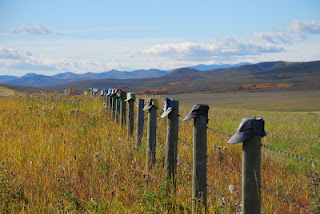 This is what ten years with a company will look like... only
with hard hats instead of ball hats.
It would be a neat way to mark one of life's milestones.


I suppose I will be just another Albertan bum looking for work, and another hard hat on a fence post somewhere. There are worse things to be.

Have a good Tuesday! And keep your chin up, just as we are doing here on the Thunderbox!