Friday Wind In The Wires

I was bantering with one a the boys in the comments yesterday about my dad and his days as a mechanic. He literally worked on everything from jet engines on down. Max Ward wanted him to become a full blown flight engineer and was going to send him to school and pay for everything - and Pop quit! It must have been a good call for him but as a young boy at the time - I just shook my head. Opportunities like that just don't exist anymore.

Max Ward had a junker he had bought somewhere and wanted it restored. I seem to recall it was a De Havilland Box Moth but maybe I am mistaken. I couldn't find anything on the net about it with a quick search. All I remember for sure was that only 3 or 4 existed in the world at that time in flyable condition - and Max wanted his restored to airworthiness so he could fly it at airshows and for PR purposes. He and Pop almost got into fisticuffs over it: Pop said restore it for static display in a museum, but Mr. Ward was adamant that it fly again. The pilots came down on Mr. Ward's side and said they would restore it themselves if Pop didn't go along. Pop was furious and told them the antique would kill someone and anyone that voluntarily flew it was an idiot - but he would take the project and see that it was done right. He and a handful of the boys restored it to airworthiness and it crashed into lake Ontario two years later. The pilot survived without a scratch if I remember correctly, and some heart broken staffers were even talking about fishing the wreck out of the water and refurbing it again. 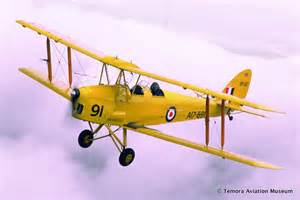 This is a De Havilland Tiger Moth.
Who can blame Mr. Ward
for losing his heart to sweethearts like this?