When I was a kid Pop had this aluminum ladder that was 'incredibly strong and versatile'. It said so right on the UFA sticker. This was back in the mid 70's and maybe the aluminum ladder hadn't been perfected yet. I have a modern one out in the garden shed that is rock solid and light years better than that old piece of shit Pop had. At the time we all called it Shaky Jake. I was the awkward 12~13 year old that boys become when their bodies start to grow faster than their minds can assimilate and I fell off that beshitted ladder a number of times. Pop would laugh and I would rage back at him to throw that piece of shit away and get a new one - and it just made Dad laugh harder.

One day I fell off it again when we were all up on the roof shovelling off the snow. I did a face plant into a huge snow drift and everyone laughed at my humiliation. It was the last straw. May it please The Court: I was not in a homicidal fit of unreasoning rage. I moved against Shaky Jake with the cool and reasoned intent to kill him once and for all.

My intent was to drag Shaky Jake out to the driveway one day when Pop wasn't around - and run over him a couple times with the farm truck! But I never got the chance. One day Shaky Jake just disappeared and I never saw that rat bastard ladder ever again. I will swear on a stack of bibles that I had nothing to do with it. Maybe that infernal ladder finally sent Pop for a header - who knows?  Pop had found a conventional old-school wooden extension ladder that he used for the rest of his recreational construction career and may even still have it. It was heavy - but it was made of honest-to-God solid wood, and not from spaghetti aluminum. 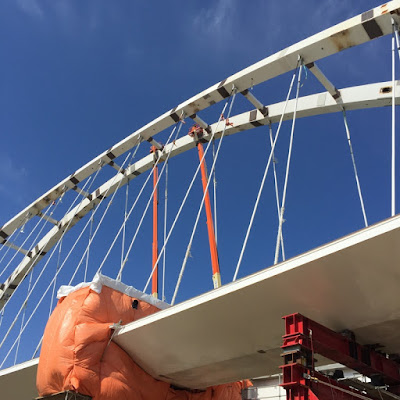 Looks like Shaky Jake mated with a man-lift to produce these two
vomit inducing twins.

Digital cell phone cameras do awful things with perspective. I once head-shot a grouse with a pistol at 30 yards and on the digital footage it looked like the bird was 10 feet away! Something similar is happening here - those guys in the man lift are probly 300 ft. or more above us.

Those lifts would sway and rock the same way Shaky Jake would - right before he dumped you on your ass! HAR HAR HAR! The guys up there were just oblivious and worked as if nothing were wrong as the river ducks flew beneath them. 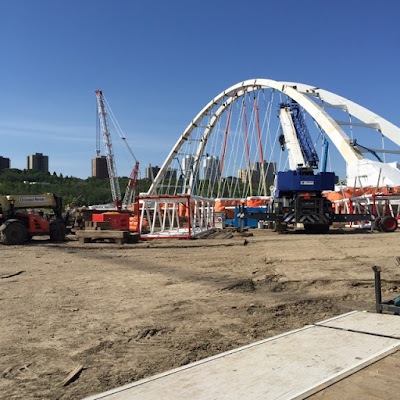 The old Walterdale Bridge in Aaaaadmontin is completely metal. It was
called the Singing Bridge by us locals
because your tires would make the metal grates thrum as you
drove your car over it.
This new bridge is going to be a lot more friendly
to motorcycles, if not as musical.

I took my national sales manager to visit with my clients here and he even pissed them off too. The man is a narcissist and droned on and on about himself for the better part of an hour during our sales call. Finally I managed to drag him out of there and we only had one shouting match. He made his usual accusations of incompetence at me - to which I responded 'at least I know when to shut my fuggin gob' and accused him of annoying the customers. HAR HAR HAR! We were about to go thermonuclear but managed to stifle ourselves after a bit. He tried to threaten me by saying he was gonna quit if I was going to be permitted to disrespect him that way. I told him that if he wanted a scapegoat or a lickspittle - he would have to go hire one.

In the old days, Old Jim would have gotten on the phone and in between us, told everyone to STFU, smarten up, chill out - and get back to work or else! In past spats, he would have given me shit too but we both knew it was just for appearances and optics and I know darned well - he knew I knew it too. People can't be left with the impression they are being picked on or singled out. Once honour had been satisfied, I would be curtly dismissed and he would go back to flogging the guilty and the perps. He always posed as a tough, mean old man and some idiots bought it... but he always tried to keep people focused and on the job rather than firing and hiring in an endless search for 'the perfect' fit or the 'perfect team'. God I love that man and wish I had run into him earlier in life. He's 91 and semi-retired now, has lymphoma in six organs - and now we all gotta play nice for his sake. When he asks how his company is doing we have to be able to say 'as good as possible!' and PROVE it. The best thing about working where I do is that it's like WKRP In Cincinatti. The WORST thing about working where I do is that it is like working for WKRP In Cincinatti, HAR HAR HAR! My boss and I are going to have to find a way to coexist; that's all there is to it. Jim was crusty but valued his employees - we must value him in return. When he passes I will probably get the punt - but that will cost my enemies some serious coin.

We did manage to hit our stride when we went to visit the various supers, estimators and coordinators for the LRT expansion project. J would start babbling and outgassing about himself, and in mock exasperation I would tell my boss to shut his gob and stop wasting time! He would make some rude jokes at my expense the same way Lou Costello and Bud Abbot swapped insults in their day.  We were actually a hit - our meeting started small and soon we had a small audience listening to the banter and passing our sales literature around and chuckling at our antics and even contributing with some of their own. We did alright - our simple meeting turned into a fairly decent presentation. When we broke up afterward we ran out of business cards and had to go out to the truck to get more. Our show wasn't as good as the ones Lesiure Suit Larry and I did back in the day - but J is no Lesiure Suit Larry. 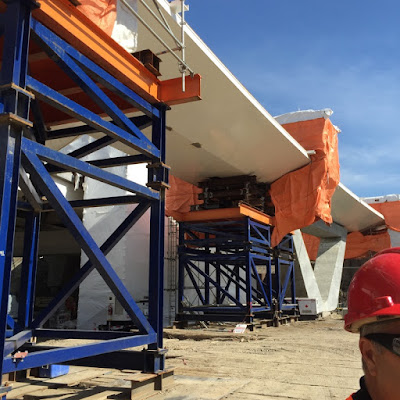 We parted on good enough terms I suppose. I have some new business avenues to pursue and new skills to develop - and he knows that we are not incompetents and morons - and that he can't treat us that way either.

So it is: Shaky Jake lives! And so for now, by the Grace of God... I do too... BAH! It's time to get back to work. Have yourselves a great Wednesday.