The transition from camping from a backpack or ATV to camping on wheels with all the amenities continues apace. It was horrible: on Friday night I got staggeringly, stupidly drunk. We were all sitting round the fire, the fine scotch started flowing and flowing ... and it didn't stop! At midnight I staggered away and passed out (I made it to my bed in the trailer) but managed to avoid the bed spins and vomiting that I probably deserved. Flapz made it till 1:00 or 1:30am... but poor Clint kept guzzling and feeding the fire until about 2:30 am. He woke up dead the next day. 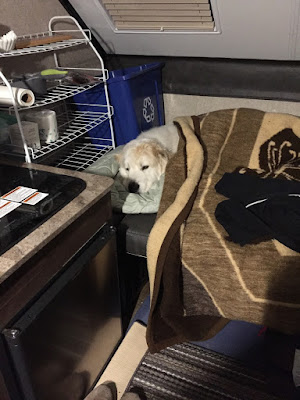 At night it still gets chilly up here in Alberta and we sleep with the furnace gently warming things up. During the hot day we have air conditioning. As is my custom I woke up Saturday at 6:30 (slept in a bit because of the booze) and then went to the rifle range. When I got back at noon I figured I would steal a quick nap during the blazing hot afternoon - and I zonked out in air conditioned bliss and wrote off the rest of the day! I only got up to eat and drink some more on Saturday night!

When we were kids my wife and the spud could pack in all the trimmings for a four star camp trip - on our backs. They would have a tent set up in minutes while I fussed and farted around with the packs. If we were camping on wheels, we could get everything we needed PLUS stuff we didn't - into an 1988 Hyundai Excel. We would literally bury our daughter in the back seat under the soft stuff and she was just as snug as a bug as long as she had her colouring books and a few toys. I suppose if we ever had a head-on collision she wouldn't even know it until they dug her out of the sleeping bags, blankets and tarps! We were going to graduate to bicycle camping but life and work got in the way and we never did it. 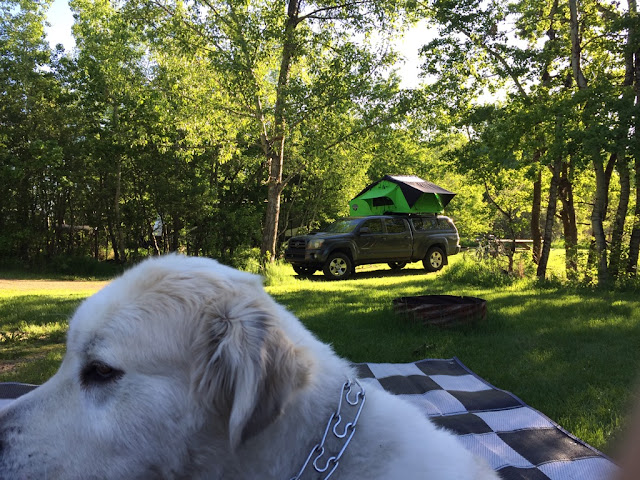 I might have to have a word with CW over at the Daily Time Waster. These kids pulled into the campsite next to us and had the coolest tent set-up I ever saw. That's "Friday Open Road" stuff right there. A ladder that goes up into the tent on the other side of the truck. They were in some kind of cycling event because apparently the lady over there was doing a little victory-dance for her man - she had won a medal or placed in the event. All I could do was smile in admiration and envy. It's not polite to stare so I broke away to go take a squirt in the outhouse, thinking about those beautiful kids and ourselves in better times and days - and when I got back they were gone. They had literally folded up and left in less than a couple of minutes.

The people I run with look at the big motorhomes and fifth wheel trailers longingly - but I envy those kids and their truck-tent. I hope they put a million miles on the truck and their bicycles.
Posted by Glen Filthie at 07:04