Can it even be done anymore? I'm sorry - because I gotta ask.

Flapz' fiancé has a boy who's 13. By all accounts he's a train wreck. Flunked out of school, can barely read, on anti-psychotic drugs for ADD and ADHD. His mom and father split ages ago and he's grown up mostly with his mom since the divorce. He's a tall, handsome little bastard and will probably look like Clark Kent when he matures. To talk to him, he's a polite, respectful lad that looks like he could be captain of the football team AND an honour student at the same time when he hits high school.

He was camping with us last weekend because his mom couldn't trust him home alone. The poor bugger had to go camping with us old farts. We tried to keep him entertained by taking him to the trap and pistol range, playing ladder-ball and scrabble and other goofy camp games and he behaved himself like a gentleman. Later on that night we got into the beers and his mom was matching me and beating me beer for beer - and I admit feeling a little roasty myself after putting that much booze down my gullet! So Flapz and I are lounging by the fire when we overhear mom and her son - she is boozily saying that the boy "will always be her little baby no matter what comes..." I heard that and glanced at Flapz - and saw that mask that he wears when he is keeping his own counsel. He's one of those guys that won't say shit if his mouth is full of it. I quickly assumed the same expression.

And sure enough - Junior erupts. He calls his mom a drunkard, (which was true enough at the time) and then they start mouthing off at each other and the boy goes to his tent in tears. "Holy mackaral," I muttered at Flapz - and that is when he told me the kid was on anti-psychotics.

I thought to myself though, that there was nothing at all wrong about the outburst. His mother had just castrated her son in front of men whom he wanted to emulate and fit in with. I woulda flipped out on my own mother if she had done that! Young men do not want to be perceived as babies or momma's boys - especially in front of other men they respect.

I only spent about three days in his company; but if I had to guess... there is nothing wrong with that boy that the odd spanking and the rewarding company of men couldn't fix. I've heard of teachers and parents (usually women) prescribing drugs like Ritalin to their boys rather than spanking them or working with them. I wonder if that might not be going on here? Flapz told me that the boy had skipped his medication and they would be dosing him again ASAP.

Maybe I am just full of shit. I spanked my daughter once when she acted like a spoiled bitch and I had the usual suspects telling me she needed drugs and therapy and not a trip to the woodshed... and suffice it to say she didn't turn out right either. She's a 32 year old kidult that we don't mention anymore - but while she lived under my roof, she was courteous, respectful and kept her nose clean... and I credit that spanking for it. I look at Flapz' stepson and just shudder to think of the world of hurt he is in for when the apron strings are cut and he goes out into the real world to face the trials and tribulations of a man.

Of course, I didn't say anything to Flapz. His attitude is that the boy is not his, and the boy's parenting is the business of Mom and that's it. I think he refuses to even ponder that boy's future and maybe he is right to do so. Of course, it's none of my damn business either, for that matter. I don't think his mom is thinking about his future either.

Having hatched a millennial myself, and watching Flapz and his lady creating an even bigger train wreck - I am going to keep my retirement options open with my .45 ... because there is going to be nobody to look after us when we are 75... 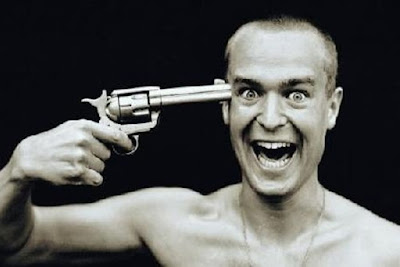 For those ignorant young pricks encouraging me to take an
early retirement - the last shell is for me.
That leaves five for you little shits.