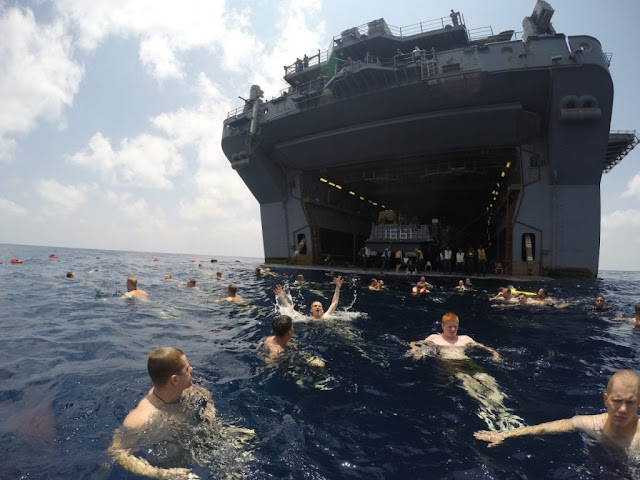 Betcha five bucks that after the photographer put the camera away,
the beach balls, air mattresses and floaty-toys came out.
Not even a BBQ on the cargo ramp?
Their state of preparedness is utterly deplorable!

When WW3 starts I am going to come down there to the USA and enlisting in the United States Navy. (I am too old, fat and chicken to be a Marine). Specifically, I want to work in the galley on an aircraft carrier. They get something like 2 or 3 thousand swabbies going for breakfast, lunch, and supper at the same time! I saw a documentary where the cooks were making bread dough in cement mixers! I'll bet they flip burgers and pancakes with snow shovels too.

Why not the Royal Canadian Navy? Put it this way: ten years ago they bought a bunch of worn out obsolete diesel electric submarines from the British. On the voyage home, some fwench pipe polisher left a hatch open in high seas, swamped the boat and an electrical fire broke out. If memory serves they had to tow the sub back to a port in Scotland, apply three whole rolls of duct tape and then set sail and try again! HAR HAR HAR!

Actually, that was mean. The reality is that Canada's liberals hate and loathe the military, and think that any monies wasted on training and equipment is better spent on pork for the welfare class. Our squaddies are the best the country has to offer, called upon to defend the worst - without the tools to do so. Our navy is in utter shambles.

But - Darwin, Murphy and the bad guys are biding their time so there's nothing to worry about.
Perhaps they've learned their lesson and have stopped slapping stupid people in the gob.