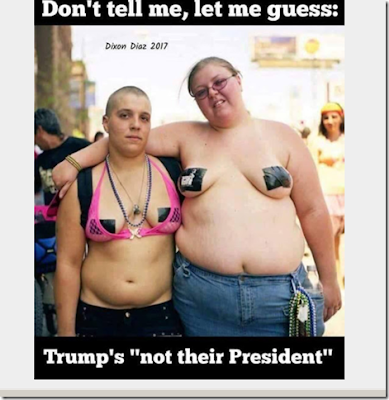 5'll getcha 10 that these two are not their father's children either.


Parenting is a tough business at the best of times, and these days, with mainstreamed lunacy and degeneracy ... it is even tougher. Consider: these two specimens have decided that 2,000 years of Christian morals and ethics are wrong. 250,000 years of human evolution are wrong. Their own biology is wrong. At some level, even the most progged of social liberals has to look on something like this, and feel somewhere within themselves that there is something deeply wrong here.

Imagine if one of those was your daughter. Sure, you can do everything wrong as a parent and still end up with good kids. You can also do everything right, and end up with something like that. If their fathers have IQ's above freezing - you can bet they are probably considering suicide.

I seem to have picked up quite a few new readers for some reason, so I figure I may as well take this opportunity to piss 'em all off! HAR HAR HAR!. Allow me to present my credentials: I was red-pilled long before there was a Manosphere, or a Dark Enlightenment or an Alt Right. People with a triple digit IQ have a fondness for red pills although I would call it simple maturity and critical thinking. I got a whole bottle of red pills rammed up my arse in suppository form when my daughter came out of the closet as a militant lesbian social justice warrior, and one of the first of the thumb sucking 'Snowflake' generation. I vowed I would never speak of her again in these pages and I intend to stick to that as much as possible - but I did learn a few things that I can pass along to other similarly afflicted fathers.

1. None of this is your fault. There is a whole metric TONNE of guilt that goes along with having a degenerate child. (Except in the obvious cases where the parents are degenerates themselves, that enable and encourage this kind of depravity). From what I have seen, homosexuality (along with tran and pan gendered sexuality) is a choice.  Even America's ex-president caused a chit storm of chatter when it turned out that he had considered a life of homosexuality in his earlier years. Let go of any guilt you may feel for your queer kid because their choices are about THEM. You and your feelings aren't even on their radar - except, perhaps, as a target.

2. For queers and SJW's (social justice warriors), being a victim means status and street credibility in their communities. Victims need abusers and villains and if they can't find any, they will manufacture them. This is a common theme among all liberals and most especially their women, actually - look at the proliferation of phoney rape accusations, or the despicable state of our family courts and divorce law. Lesbians typically have imaginary and self inflicted parental issues, usually with the father, but not always. My daughter's love partner has serious hang ups with her mother, for example. When I discovered that I was a child abuser I was crushed - even though people that hated me and wanted to believe the worst about me - refused to believe that. I should be thankful, because men wrongfully accused of being abusers have actually gone to jail.

3. Most homosexuality today is about rebellion (and hence, it's a choice). Do not internalize your kid's problems. Those two gals above are not 'expressing themselves'. If they actually tried to do that I can tell you right now - there would be nothing for them to express! Their display is nothing more than a diseased, raised middle finger at anyone with conventional morals and ethics. Look at those two closely - do they look happy? The big one has a contemptuous smirk, while the Skin Headette has a look that says, 'F*** you, Daddy...!' Most fathers will recognize that look, I suppose.

4. Fathers get pulled through the wringer with feral daughters. Such daughters soon learn that they can manipulate their fathers by threatening themselves with self destructive behaviour. It's literally a case of, 'Do what I want you to do, Daddy - or I'll hurt myself!'. Don't get sucked into that! Look after your daughter as best you can, but realize you have limits, and when she exceeds them you will need to take steps to look after yourself. If she is old enough to know better, welp - the School Of Hard Knocks beckons.

5. Fathers are vulnerable to feral daughters. GET SUPPORT. In my case, my daughter was an SJW before they were called SJW's. She was a crybully snowflake before we ever heard of the term, or safe places or microaggressions. I started asking politically incorrect questions on forums and internet meeting places in hopes of getting some understanding of my daughter's behaviour and got banned from a lot of them for doing so. Eventually I lucked out and joined a closed and locked forum of parents just like me - that had homosexual children that they did not understand. These are largely secret places where the truth can be spoken about anything - and honestly discussed. The old hands that had queer kids of their own helped noobs like me make sense of their kids. I remember a light colonel in New York, and a truck driving lady from Arizona that took pity on me and they started predicting the way my daughter would act and how she would respond to things with 100% accuracy. I didn't believe them when they predicted my daughter would falsely accuse me of child abuse. I did not believe them when they predicted that she would ruthlessly manipulate people that loved her the most. I didn't believe them when they predicted she would destroy my family. That internet forum was later discovered and shuttered for hate speech or some such bullshit, but I will tell you right now - there are others. Truth is hate speech now, and unfortunately access to it can be difficult. You took that Red Pill - now ask the questions and find answers to them.

6. One of the most contemptible mistakes a man can make when his family breaks down is to blame himself and indulge in self pity. If you don't watch out, YOU will become the victim like I did! I blamed myself for my daughter's degeneracy, I would lie awake at night wondering if I could have said or done anything  that would have saved our family, and often I asked the question: 'Why me, Lord? Why my daughter...?' That is entirely the WRONG approach to the dissolution of the family. Man up, STFU - AND MOVE ON. If ya can - don't look back because there is nothing to see. I am one that always looks back - and when I looked in the rear view mirror of life, I did not see my beautiful daughter - I saw a mean, angry freak like those two gals above. Why torture yourself?

There's two types of stupidity in the world today. There is the stupidity derived from rotten luck, lack of information and the convergence of unlikely negative factors. In other words, shit happens. Then there is the stupidity born of  pig ignorant stubbornness, willful and premeditated dishonesty, and plain old human fuckery. 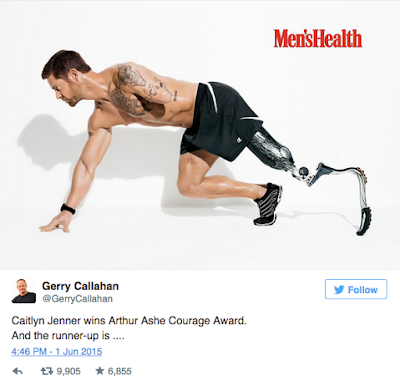 Do you think that guy spends a lot of time pissing and moaning and feeling sorry for himself?
Can you guess which type of stupidity cost him the Ashe Courage Award?
Do you think he even cares?

For men and fathers losing kids is like losing limbs. The things that matter remain the same: mindset, attitude and courage. This fella regards is so strong and courageous, he regards the loss of his limbs as an inconvenience. Just as being a victim is a deliberate choice for SJW queers and snowflakes - so it goes for us guys too.

Keep yer stick on the ice and have yourself a great Hump Day.
Posted by Glen Filthie at 06:32