Sure, I had AR's n' .22's and a couple blackpowder guns, but MY gun - the one I use when the stubfarts at the range get lippy and unruly and need to be humiliated to restore their manners - was a heavy barrelled Ruger No.1 in .25-06. That thing would shoot .5 ~.75 MOA all day long and I shot that gun like crazy for 15 years. All the gun club duffers would start sucking up and being nice and try to buy it off me, but I rudely told them all to get stuffed! I was the king of the riflemen on my range, and I wasn't going to take any guff from the peons and peasantry!!!

And one day - I noticed my groups started to open up. I was at the peak of my game back then and trusted my marksmanship. In horror, I dug out the chronograph and noticed my velocities dropping off too. Over then next couple months it was too horrible to contemplate but it was true: I had burned the throat out on the barrel. That gun would never shoot like it used to again.

All my arch enemies came crawling out of the woodwork to mock and slander me as I fell from gun-club grace. Suddenly, cretins like Flapz, Chains, Old Jim, Ian and that fuggin paki guy could wipe the matt with me using their precision bolt guns. I had become a peon.

Oh sure, I could try and re-barrel the old No.1 or build a precision bolt gun - but that's a crap shoot. I started buying and selling guns, looking for something new to challenge me. One day Clay at Prophet River ordered me in a Springfield M1A - the civvie equivalent to the M14 Garand rifle used by the US militaries back in the 50's and 60's. I got the Match Rifle version. I loved the gun, but they aren't meant to be shot with scopes. It's easy-peasy to put a scope on one if all you do is shoot from the bench... but I sling up and shoot from the formal marksman positions and sometimes even off my hind feet. I dicked around with my M1A trying to make it 'user friendly' for a serious rifleman and marksman. I bought and threw out my first scope mount. I found some guy on the internet that made The Mother Of All M14 scope mounts and thought I was good to go - but scopes sit so high on M1A's that ya need to get a cheek riser to use them. I could only get crappy junky cheapo risers here in Canada - so I said screw it and made my own out of leather. Then I threw an expensive Swarovski 3x9 on it and just couldn't get that damn gun to fit me for love or money. Over the last years I diddled with it and finally lost my temper about a month ago. I was either going to get this damned thing shooting and fitting me properly,  or I was going to build a custom AR15 target gun in 6.5mm Grendel.

Finally...finally I think I got 'er all figgered out!

That's a Trijicon 5x25 variable with a simple 4 plex reticle.

This is a serious, expensive piece of glass. (Actually it isn't, I suppose. I paid $1800.00 for it installed but a similar Nighforce is $3600 and the Steiners get up there too). Putting a better scope than this on an M1A starts to take on a 'polishing turd' aspect. 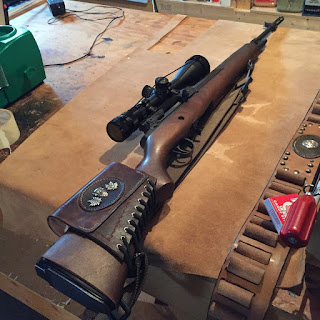 That's the cheek riser I made for it on the back. It has a couple
maple leaf and buffalo conchos on it
and it kinda has an RCMP-ish air about it.
Not sure I like the looks of it - but it works.


I had the geezer at P&D mount the scope because they true everything up, prep and square the bases and they only charge $40.00 for it. I could do all that myself but I don't want to buy the tools and spend the time with it. Usually they set the scopes up so that they are at least on the paper at 100 yards.  Not this time - when I went out to formally sight it in - it must have been hitting at least a couple feet high. Usually I can sight in with ten rounds, and six of those are just a formality. This time I burned up 25. I've never had that happen with scopes mounted by P&D before. 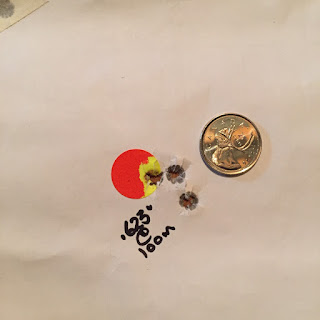 Those are my last three off a rudimentary rest. Then I found one last shell rolling around in my shooting bag and sent it at the 6" 100m gong off hand and made it ring like a bell! The gun gave me a gentle push and rolled up just like my beloved old No. 1 used to.

The King has returned - and He's madder than hell! My arch enemies are all in for a very, very rude surprise at the next match! HAR HAR HAR!!!!

Have a great weekend guys - we'll see ya on the range! No rude jokes at my expense will be tolerated!!!
Posted by Glen Filthie at 17:08