How I envy you Yanks. I just heard that Trump put out a tweet calling our Prime Minister, Turdo La Doo - a moron because he gave a convicted terrorist something like $10 million in some asinine lawsuit or other. I won't even look into the details of that because I will say something that will get me in trouble. All I can say is that if Trump called Justin Trudeau a moron - he was entirely right to do so. That little maggot has shot his face off at other statesmen and it's good to see someone give him a taste of his own medicine.

Then there was that CNN thing. That beshitted news network has been insulting my intelligence for decades now. It finally got so bad I just couldn't watch it anymore without wanting to shoot the TV set. When that meme war broke out I thought it was incredibly lame but again - it was really nice to see those liberal assholes lose their chit over it.

However - Vox Day wins the internet with this meme: 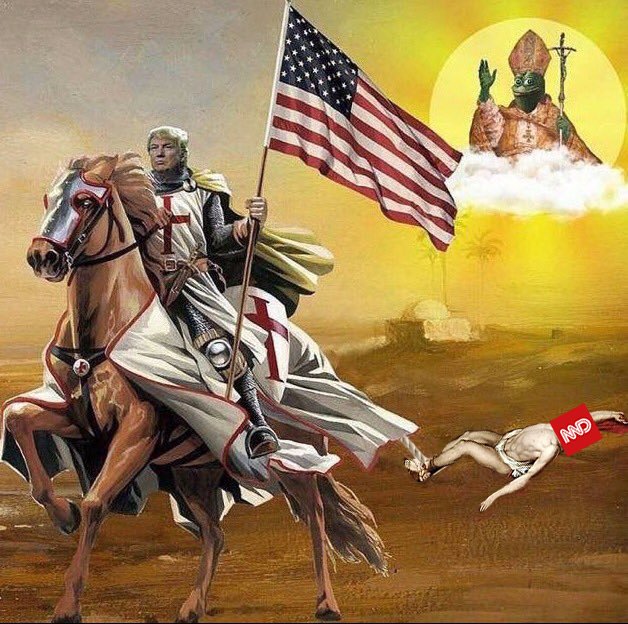 I suppose as a Christian of sorts I should be offended by that but the toad with the halo? HAR HAR HAR!!!! Schadenfreude is probably a sin too, come to think of it. But yannow - given the asshattery coming out of the Vatican these days, I would be more inclinded to trust Pepe to be God's representative than that meat head that currently has the job.

There is one god but Pepe.
And Trump is his prophet!
HAR HAR HAR!!!!

Have a great Sunday and thanks for dropping in!
Posted by Glen Filthie at 10:43