The Gun That Started WW1 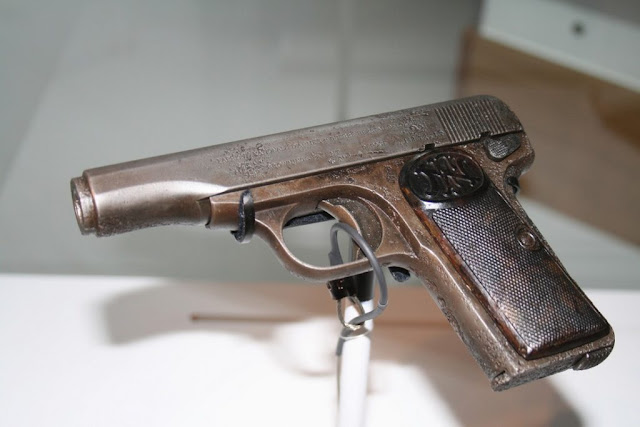 GAH. Pocket pistols. Hork! Spit! I shot Mad Jack in the ass with one of those for a joke and when he found out about it he ran me down and beat me to a bloody green pulp! HAR HAR HAR!

I shouldn't joke, I suppose - these things ARE deadly at close range. Apparently the Archduke of Austria and his wife were cashiered by this gun. When I look at that little pistol, and the hell and fury it unleashed - I can almost see the liberal lefty calls for gun control. My granddad got pinned down and shot up in No Man's Land in WW1 and became a wounded war vet at the age of 17. Until his dying days he got pissy and sorrowful on Remembrance Day and almost lost his mud when they let shopping malls stay open for business during the 'holiday'.  Grampa was disgusted with me and my guns.

It makes me uncomfortable when I cross swords with vets. They've been in the chit, they or their friends have been hurt or killed there, and I completely understand and respect their scars that you can see and those you can't. But the moral high ground is what it is; our leaders HAVE to fear us, or at least respect us. Treaties, contracts and promises are just hot air - but cold steel and hot lead are real and will make everyone at least try to be honest.