A lawyer dodges bullets from an angry client
and unfortunately survives.
Expect more of this in the future.

I suppose I shouldn't laugh. Mentally ill people are not funny. But unfortunately I see more stuff like this on the way, and to be honest, the judiciary does more than it's fair share to bring it on themselves. They have become an institution about laws rather than justice.

Last week, at the behest of our prime minister, Turdo La Doo,  Omar Khadr was awarded $10.5 million dollars by the gov't in an out-of-court settlement. Ya see - back when Omar was only a little vibrant, he threw a hand grenade at some squaddies, killing one and blinding the other. He should have been shot and left for the crows on the battlefield ... but that's not how American squaddies roll. Pity.

I admit I am not too familiar with the case and I don't want to be - because I will say something that might get me in trouble with the pastey faced bedwetters that control the asylum up here in Canada. But apparently, when little Omar got shipped out to Gitmo he was a Canadian citizen and a child soldier... and for all the pain and suffering he put up with there - Justin Turdo figures this moslem POS deserves $10.5 million dollars because his rights were violated. Or something. That's our judiciary at work. That's our liberals at work. May God rot their balls.

In the vid above the perp is described as mentally unstable, disgruntled and of unsound mind. Yet he still had the book thrown at him in court - and I suspect the reason for that is that he went after a judicial apparatchik instead of lowly peons like you or I. If he had gone after one of us, I have no doubt the judge would have taken his mental state into consideration and probably have given him a slap on the wrist.

As usual, the Z Man has a few spectacular comments about judicial lawfare and some fine social commentary.

I regard myself as a law abiding man. I respect our courts and their mission, but I have nothing but contempt for the swine in charge of those institutions today. Some of our judges are nothing more than traitors and outright public enemies. I abide by the rule of law, but remind the Usual Suspects that I am a citizen of Alberta and not a subject of (hork, spit) - Canada. Abuse me at your peril.

Were I a Canadian judge I would have done my duty and protected the Canadian people in the Omar Khadr case. I would have had Omar deported on the next boatload of rotten cabbage to Afghanistan - along with his entire family. (It's a matter of public record - those shit heads raise funds for and support terrorist organizations but we can't prosecute them because racism... or something). Then I would have told the rest of those fig farming goat feltchers that the jig was up - and if they were going to bring their shit to MY country they will be prosecuted to the full extent of the law - and their stupid religion be damned. 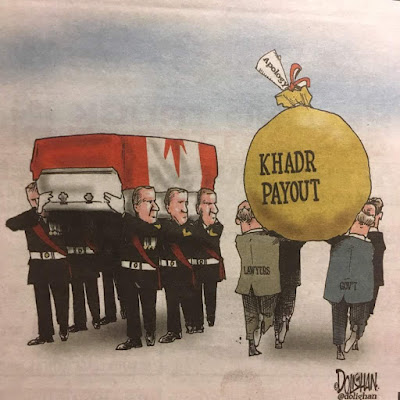 That's about the size of it.