A Game Of Porcelain Thrones 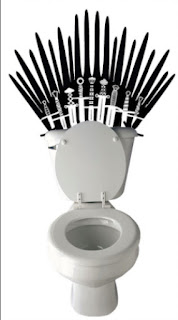 I think I’m in the outhouse again.


My parents aren’t talking to me. Again. I must have done something. Haven’t heard from Mom in some time, so I texted her a pic of some of the wife’s rogue flowers that refuse to grow in their flower box, and sprouted up between the paving stones out in front – like the weeds do. (Who woulda thunk flowers could be rebels, mutineers, and insurgents? HAR HAR HAR!) Usually she’ll come back with a text something like ‘Oh, that’s nice…’ or ‘when are we going to meet for coffee…?’ I know she’s ignoring me because she is just the world’s biggest social butterfly – she’s all over facebook and her phone, texting her friends and so forth. I shouldn’t be a wank about that either – she’s engaged and doing things and seeing people and that is good for her. But lately as she ages she’s started to play head games with me and when I forget myself – they make me crazy. I am getting old and stupid too; I seriously need a sense of humour and I am taking myself way to seriously as I get old. I let a lot of stuff piss me off that I shouldn’t. Hmpffff – or maybe I need to grow up? As Red says, “Ya can’t stay young, but you can always be immature!”


I know that Pop hasn’t spontaneously combusted and burnt the house down because I drive by on a regular basis to make sure. Pop farts like a race horse and one spark – and that whole block will end up in the middle of next week! But the house is well kept, the lawn is manicured like a putting green, and all is in order. My parents are obviously alive and well.


So what did I do this time? I’m not sure, exactly. I MIGHT have forgotten Mom’s birthday – I think as she gets older she takes them more seriously. But at the time, they were out of town camping, then we were, and the summer just got away from us. Could she have her nose out of joint about that? I coulda swore we got her a card and went over for coffee but that might have been Pop’s birthday. Birthday’s mean nothing to me whatsoever – I don’t even want a card on mine. But womenfolk can be difficult about such things.


The other possibility is that my Mom is a busy woman with a life going on, and has her hands absolutely FULL trying to keep her disobedient husband and dog in line – and somehow a text from her retarded son slipped under her radar.


So what should I do? My family life is a hodgepodge of power games, head games, and plot – where wins and losses turn on the slip a tongue, or a poorly worded rebuttal! Think, Filthie! THINK!   ;) One false move - and my fiendish brother will inherit the vast Filthie Fortune!!! With such incredible wealth - he'll be in a position to act for the Forces Of Evil and thwart me as I try to bring law and order to the world! HAR HAR HAR! ((Actually I intend to see that he inherits - it will serve him right!) Fact is I suppose we'll BOTH get the shaft; Pop has told us both he intends to leave us with nothing but his debts! Can't blame him, I would do the same in his boat!!!)

Here’s what I’m gonna do: there’s a combination greenhouse/restaurant north of town here called Greenland. I THINK it’s a chick thing – they have a greenhouse, a gift shop full of frillies and nicknacks and ornaments – and a bistro where the clucks can chatter and have a glass of wine. I figure if I invited ‘em out for dinner – and made sure to shave and bathe first – a lunch or supper out might improve some attitudes. I have to do something, lest my evil elder brother inherit the vast Filthie Fortune! HAR HAR HAR! (Actually, I intend to see that he does – it would serve him right!)


Comments, Gentlemen? Options? As always, your two cents are sincerely appreciated.
Posted by Glen Filthie at 08:09