Awhile back I was enjoying a satisfying day dream brought about by a videeyah game I saw called Castle Wolfenstein. The premise in the story behind the game was that eeeeeeeevil Nazis invaded America back in the 60's and turned it into a swinging vacation spot for The Third Reich! I thought the trailer for it was relaxing as hell!

By contrast, it was a proggie's nightmare - KKK coneheads walk the streets and exchange pleasnatries with friends and neighbours and goose-stepping soldiers. The big rifles have the Luger-esque toggle link actions. Jet planes go over and the B2 bombers sport Iron Crosses and Swastikas. Elevator music wafts onto the street as 1960's crooners sing to beats and baselines that soothe the soul. There are no Black Lives Matter types chimping out and rioting, no bitchy women in vagina hats, and no faggots to be seen anywhere. Ahhhhhhhhhhh. Why would anyone want to spoil that? HAR HAR HAR HAR HAR!!! I can see why the chit-libs would have problems with it!

But me? I'd fit right in, finer n' frogs' hair! "Excuse me, Gruppenfurher - but did you know that BW, Pete and Quartermain are JOOS? Somebody should make SOAP out of 'em!" I can just imagine shooting Scheisser machine guns at the rod n' gun club. For me, the war between BMW and Harley was lost long ago. I would WELCOME our new fascist overlords!  :) 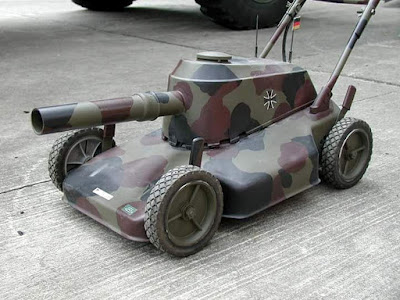 I suppose I shouldn't jest about fascists in this day and age, in this political climate. But that is something that perplexes me. The history books are what they are, and I suppose they are subject to the same forces that have stupid people toppling statues and trying to erase and revise history today.

Dispense with all that. Dispense with what you know and were taught. As a thought experiment, go back to square one. Nazi Germany - a nation that went from rubber boots to jack boots in the blink of an eye. Out of nothing they created fighter planes, tanks, mechanized war machines that left everyone else in the dust. The socialists of Russia - drunks and cretins that couldn't even feed themselves. Fwance - craven cowards and incompetents. Brits - fierce enough, but like America, TOTALLY unprepared for WW2.

How did Germany lose? I know what the history books say. I look around and see socialists running rampant today and the results speak for themselves: Mizz U, Venezuela, North Korea.

Something, somewhere, doesn't add up.