I've always looked down my long nose at bolt guns and that's a dangerous thing. You can get beat up for that when certain guys are on the firing line - and more n' likely than not you would deserve it too - like me! HAR HAR HAR!

I've always been a little snobbish about guns and I looked down my nose at bolt guns because the vast majority of 'em have no soul. Mass produced plastic, aluminum - and even a moron can make them shoot well. I don't care if they are the most inherently accurate of all the guns, I don't care if they are lightning fast repeaters - I. Don't. Care. And I won't drive a minivan, or a Prius or any other piss burning econobox either!

I say all that with the usual caveats, of course. The old milsurps and war horses like the Brit .303 SMLE's (Smellies, as we of the Commonwealth like to call them), the classic Mausers and Springfields... and the fine safari guns like WL Emery's Rigby's are certainly acceptable arms for any self respecting rifleman. Well finished .22 bolt guns are a delight for the gun clubbing old stubfart. But... the RemWinMarlinSavage crap...? Fah! Give me a fine falling block single shot, or a lever gun, or better yet - a gas gun semi-auto! At least they have some character!

I got beat up a lot by the cool kids grumpy old bastids on the range and finally caved to peer pressure. I bought a shit house Remington 700 that came right from the factory with a target bull barrel. I put 20 rounds through it, pulled it and threw it in the garbage! "What kinda shit are those retards smoking at Big Green these days?" I cursed! Those a-holes are turning out unfinished guns in my opinion and now all the Yank manufacturers are doing it! I have a message for Remington, Winchester, Marlin and Savage: Screw you guys! If you all took a 50% pay cut, you'd still be earning twice what you're worth!!! And you turd brains at Ruger had better shape the hell up too!

*Ahem* Excuse me for that, perhaps I need my Tourette's Syndrome medicine now... so, I ripped the barrel off the Remington and bought a 20" air gauged Shilen Match barrel and figured I could make a light sniper out of it... but my heart just wasn't in it.

It was a bolt gun.

A couple weeks ago I was bored with the M1A and dug the old bolt gun out of the safe - and it just seemed to feel different in my hands than it did when I put it away several years back. 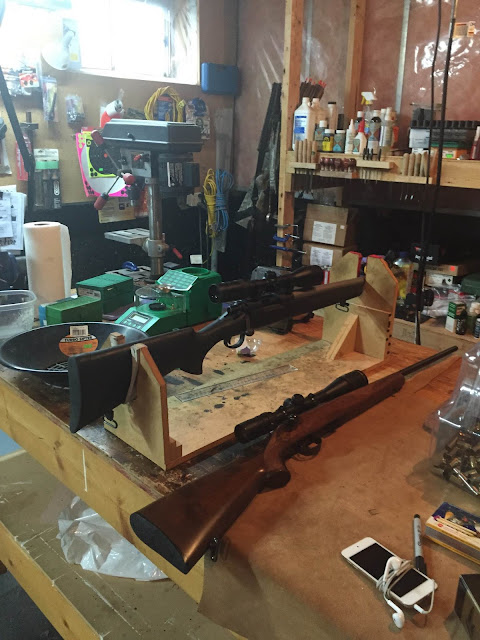 Out of the 19 guns I own, these are the only bolt actions.
The 22 is a beautiful CZ as pretty as WL Emery's Rigby buffalo gun
and the Rem has a custom match barrel with a Swarovski 2.5 ~ 10 scope on it.

Well... that bolt gun just seems to fit me better now for some reason. It has an El Cheapo rubber stock on it - Hogue, if I remember correctly. I decided to lay a beating on the 6" gong at 100m offhand off my hind feet - and I smacked the ever lovin' crap out of it shot after shot after shot! So I went home and loaded up some trial shells for it and now I am playing with bolt guns again. I am also trying to suss out a new AR15 precision gun and bought some Hogden CFE223 to try in it... and the boys are saying you can burn it in .308 too and get good results. 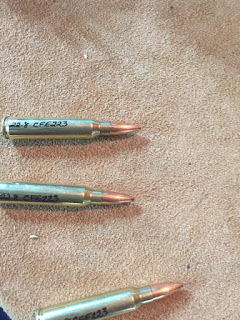 Johnny on YouTube is having some spectacular results
with heavy match bullets and Hogden CFE223
gunpowder. Figured I would give 'em a whirl too...


So tomorrow I head out with a ... a... a bolt gun. And of course I gotta bag up and shoot off the bench instead of working on my formal position shooting. But damn - this gun would be right at home on a deer hunt just as it is! It's about the same handy dimensions as a 30-30 albeit much heavier... but I don't mind heavy guns and actually prefer them.

I'll keep ya posted on the results. My loads might not work well in your guns of course - but if we're both lucky they will give you a good starting point. I'll post this today as I'm tied up tomorrow - so have a good Friday. If time permits I will try to post some rude jokes tomorrow too if I can.
Posted by Glen Filthie at 17:10