Canada: A Nation Of Peace Keepers 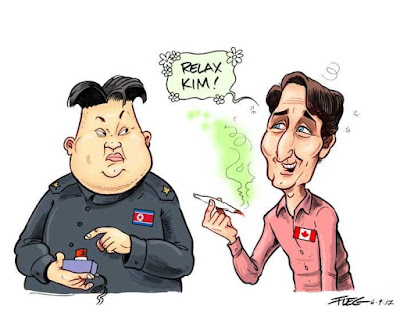 I notice that all the Canadian liberal chit rags are all a-flather about that ignernt Trump and how he's gonna start a war with some obese gook in North Korea. Of course, none of 'em have a clue about how to resolve the differences beyond what you see in the cartoon above.

So, while the world burns, our economy swirls down the toilet - our idiot liberals are consumed with legalizing pot! I think I read somewhere that they intend to have it 'legalized' by next summer. The Mounties have basically told the liberals to shove it because their laws are unenforceable. The idea was classic pot-head: if ya legalize all the dope, man, ya can regulate it and TAX it and make money off it dude...

If I understand their proposal correctly, that was the intent of the new pot laws. The problem the liberals never counted on was that any idiot can grow this stuff and bring it to market faster, cheaper and at a better quality than gubbimint drug dealers.

I asked my own doctor years ago if there was any real medical merit to weed and the man replied "Absolutely not. There is no doctor worth his salt that would advocate for pot, and those that do are doing so for political purposes and not medical ones..." Others have come out against the weed saying that it poses a huge medical risk, especially with younger users.

I no longer care. Any concept of public decency and morals are long gone. Our kids aren't growing up right any more and it's been that way for a long, long time. One only need to look at our idiot Prime Minister to see that, raised as he was by a bipolar whore and an effeminate socialist and intellectual poseur.

It's gonna get worse before it gets better and it looks like our kids are on their own.
Posted by Glen Filthie at 07:33