Friday Wind In The Wires -Canadiana Edition: The Avro Arrow


Canadian patriotism is an act of sheer grit and effort and has been for most of my life.

Our celebs are untalented CBC hacks that couldn't cut it in the American entertainment industry. Our football teams are filled with negro cast offs from the NFL and if any talent DOES surface in the CFL - they get poached by the NFL. Our universities are empty, flyblown intellectual wastelands. There's nothing really going on up here except liberal virtue signalling as things slowly get worse. You Yanks know the drill after 8 years of the Buckwheat Administration I suppose. Our liberals make Obama look good.

And - our military. JFC. Not many people are aware of it in these days but decades ago Canada had a respectable military for its size. After WW2 ours was the 4th largest navy in the world. Granted, most of our ships were light frigates, support vessels and destroyers - but if our allies ran into trouble abroad they could count on us to get to their side, and project our force with theirs to protect our interests. Contrast that with today: when a token show of force was required from Canada in Afghanistan - we had no way to get the squaddies there. They had to hitch a ride with the Yanks. When they got there they had the wrong camo and stood out in the desert like sore thumbs. When their vehicles arrived they were not able to function in the desert environment. More bumming and borrowing. I almost shot my TV set two weeks after they arrived in the theatre. General Rick The Dick Hillier was posing for the cameras and the slobs at the CBC when he proudly proclaimed that it was 'MISSION ACCOMPLISHED!' in Afghanistan! Canada saved the day! Then I wanted to shoot our idiot Prime Minister, Paul Martin. Ol' fartin' Martin gave The Dick a big grin and a thumbs up and they had themselves the usual liberal circle jerk for the cameras and flattered and praised themselves. Thankfully the liberals got kicked to the curb after that and Stephen Harper came in and started addressing some of our military's shortcomings. When those vets came home from Afghanistan, their jumbo jets were smartly escorted by functioning CF18 fighter jets. They had to do two turns around the city before they were allowed to land, and for me it was a tall drink of cool water. There is still some things to be proud of here.

In a similar fashion our aviation patriots cling to the myth of the Avro Arrow. To take exception to any part of that narrative will draw angry rebukes. 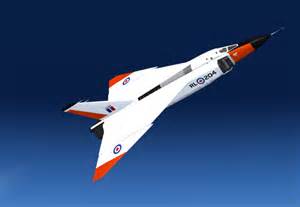 If you listen to Canadian fan boys the myth goes like this - this experimental aircraft was light years ahead of anything else in the world and decades ahead of it's time. It was faster, more maneuverable and could haul heavier ordnance loads and probly even had air conditioning, tilt steering and beverage holders. But - because of some CONSERVATIVE political flubdubbery the program got cancelled and the prototypes of The Best Plane In The World - got scrapped. Apparently the thing only flew a few times and there's no real, actual proof of what this thing could do - but that doesn't deter the fan boys to this day. The CBC even did a crockumentary  ahem, *docu-drama* on it starring Dan Akroyd if I remember correctly. It was riddled with fictional 'composite characters' and was the usual, predictable liberal hit piece on Chief Dief - who was portrayed as an irritable and senile old man who had no business being in the Prime Minister's office.

I was so intrigued by the topic that I researched it for myself - and started uncovering snippets and facts that make more sense. As always, context is key. Consider the flap currently going on about the F35 - and how much money was spent getting it into production, and how much more money will need to be spent to make it a functional tip of the spear in both our militaries - it boggles the mind of both liberals AND conservatives. At the time of the Arrow, Canada had a standing inventory of all the old birds like the Starfighters and such. Engines could be swapped in 8 hours. Parts were available. Crews knew these birds inside and out - and the Arrow just did not make tactical or financial sense at the time. Getting the Arrow into production would make the finances of today's F35's look tame. Our enemies in the third world had a handful of MiG17's and old prop jobs. Another nail in the coffin of the Arrow was that Canada's spoiled baby boomers were greasy hippies and pacifist children at the time, and they hated the military with the heat of 1000 suns. Canada's formerly respectable military was in their sights, and any excuse to cut their funding and free up money for pork and welfare was eagerly embraced. Even if the fan boys were right about this bird being decades ahead of it's time - there was no way this bird would ever Stand On Guard For Thee. It may have been a great plane - but it was conceived in a time with lots of other great planes and nobody wanted to pay for them, either!

Today it's even worse. Smart munitions have almost made manned aircraft obsolete. Drones and missiles can blast fighter planes to smithereens half a world away right in their hangars. It's hard to make a case for the fighter plane at all.

The times, they are a-changin' but unfortunately some things stay the same. I see a day when all these grand war birds collect dust in museums for the kids to boggle and shake their heads at - and I am not sure whether that will be a good thing or not.
Posted by Glen Filthie at 08:36