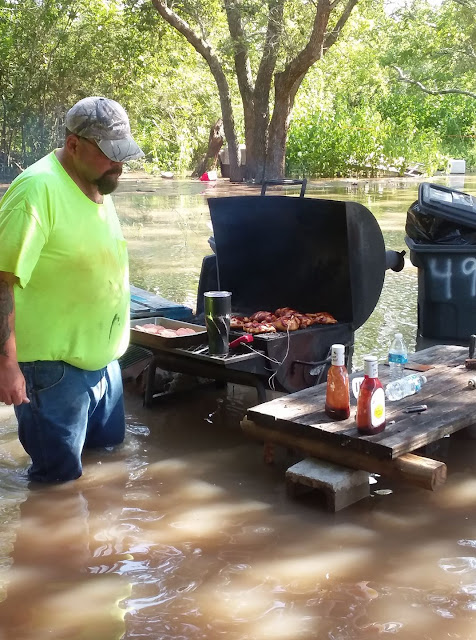 I heard through the grape vine that our friends down in Texas had a spot of rain. It's good to see they are keeping their priorities straight and their sense of humour. That, right there is courage and humour worthy of an Albertan! Ya don't have to worry about guys like these - in tough times they get together, sort it out and clean up the mess afterward and move on. Able bodied men run toward the trouble in such places, unlike the turd brains in New Orleans who used Katrina as an opportunity to loot and steal. Or bitch about how everyone else was too slow to help them out and it just HAD to be racism involved.

Speaking of eeeeeeevil racist Texans: I haven't been having any luck lately with my entertainment. Last night I asked the wife to download a promising looking movie from I-Tunes, and the story was about American Civil War 2. It looked like it might be alright. Plot: the  eeeevil hatey Southern States started an undeclared war against they faggotry of Noo Yawk Fuggin City or some other shit-lib proggie enclave, foolishly thinking they would be a push-over because the place was full a vibrants, drug addicted ethnics, degenerates and queers. And of course the racist-eeeeeevil-hatey white men were put on the run by some empowered white girl and her gunned up meat head side kick. I turned it off half way through because it was like watching a show written by rabbits on how to be a wolves. I have a tough time imagining Texans like our boy above shooting up civilians in mass murders just for the fun of it. And an even harder time of imagining the beta-males and their bitchy, ugly women standing against them effectively. Why, I bet if a civil war DID break out against the Yankees, their negroes would burn their own neighbourhoods down along with those of the people that would otherwise protect them, HAR HAR HAR!!! The whole mess was so implausible I couldn't get drawn into the story.

So I figgered I would go on Amazon and buy a book. I thought I was being smart, I really did. I avoid science fiction like the plague because all there is out there these days is stuff ripped off from former literary greats like Heinlein or Asimov. But - for today's writers to keep the plot new and original dontchyaknow - all the characters are butt-blasters, or carptet munchers or Marxists. I don't care to read about Faggots In Space or The Time Travelling Tranny - so I went to my new favorite genre - historical fiction and downloaded one about Sparta. I didn't get more than ten pages in before it became apparent that the book was going to be about two fudge packers making eyes at each other and slobbering. JFC! Who writes this shit??? I looked at the author - a woman. (Or whatever passes for one these days in those circles - it was a woman's name as the author, that's all I know).

I probably flushed $8.00 down the crapper last night to be insulted and lectured by degenerates that aren't fit to shine my shoes. It's always the same with liberal assholes; they are all eager to insult, to goad, to start a fight - and then start pissing and moaning about persecution when they get it and lose.
I read somewhere that they are gonna re-make Lord Of The Flies except it'll be with girls instead of boys.

It's sad because it's obvious that we've lost our creativity. It used to be that great stories were written by great people. But - if you look at that creative literary class today, they are all a bunch of clueless spinsters and cat ladies, or effeminate big city manginas and metrosexuals. Losers like that can't create things for others; they are obsessed with themselves, their plumbing and their failures to come to terms with it. If America is to be great again, a new creative literary class would be a great place to start.