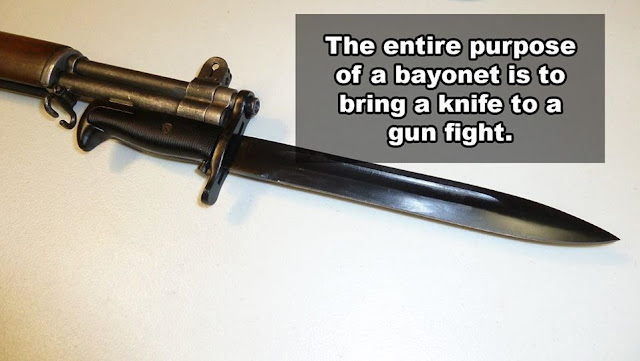 Some years ago some gun blogger twit was bragging about how he took a course in AR15 carbine management. A couple of 'em did. One of 'em - a gun blogging ditz I don't personally care for, bragged that she fired 1800 rounds in 3 days! And guess what?!?!? Nothing broke!!!!

When I saw how these 'courses' worked on YouTube all I could do was shake my head. It's no wonder that people think gun owners are idiots sometimes. The 'students' shot at targets that were impossibly close, as fast as they could pull the trigger. They wore 'battle belts' or bandoliers holding a dozen 30 round mags. They were loaded out with more ammo than a friggin Marine. I am sure they will be quite good at handling themselves if they ever find themselves surrounded by a mob of homicidal Brownies or girl scouts...! Transition to yer pistol, pin heads! HAR HAR HAR! 'Tactical Carbine Training Course' ... my rosy red ass! HAR HAR HAR!

If they're that close, and that mean - you won't last long enough to dump one mag, never mind several. A couple years back some failed liberal social experiment went to a church picnic with the idea of slaughtering a bunch of eeeeeevil Christians with his black guns. He waded into the thick of 'em, dropped his duffel - and pulled out his gat and got a couple shots off - when some lady pulled a revolver and shot him twice in the chest and killed him. (No, you wouldn't have heard about that one, because none of the mainstream rags thought it newsworthy. Body counts were probably too low or something).

Does the bayonet still have a place on the battlefield? I dunno, I'm just asking because I am NOT an operator, and I don't think those strutting tactical poseurs are either. I would think that rather than learning how to dump 130 rounds into a human sized target in 30 seconds from 5 feet away, a fella would be far much further ahead - tactically speaking - to learn how to use a bayonet and maybe how to treat shock, trauma and other gun shot wounds.

But whadda I know? Today I am going to re-zero my M1A as I needed a new mount for the scope, and I will be starting my love affair with a new AR15 precision gun. If you want to learn something USEFUL about the AR15 and want to enjoy it as a gentleman's pastime rather than a child's toy - Johnny will be happy to get ya going. Be sure to hit the like and subscribe - he is doing top notch work and putting a lot of effort into it. Fact is, his work is so good I just might send him a few bucks to help keep him going. Yeah - he's that good.


Shoot straight and have a great Saturday.