No, Your Pistol Is NOT For "Fighting Your Way To Your Rifle"

If you think that way during a gun fight you'll never make it to your rifle. And if yer dumb enough to believe that tripe ya probly deserve it too!! Legends like Jeff Cooper, Rob Leatham and Bill Blankenship would probably have your head for saying that and rightfully so.


It's a tragedy, of course. And of course, the feather merchants, the empty-headed politicos, and the media morons all have to get involved to figure out what went wrong, who's to blame, and how to prevent it in the future. GRRRRRRRR!!!! It never occurs to any of these fags to actually let the cops sort it out, right?

We had the same thing happen out here in Alberta years back at Mayerthorpe. Four mounties dispatched to the property of a known loon, also known to be armed - and four dead cops later, the same circus started up.

The blunt truth of it is that there is no one to blame. And there's pretty much nothing to be done about it. No, gun control won't work to deter crime, any nation that enforces it only ends up with more to show for it. No, giving the Mounties AR15 carbines wouldn't have helped - because they weren't killed with firepower, they were killed with tactics. They were ambushed and dead before they could even consider counter-strategy. That's what happens to most squaddies when they get ambushed too.

Add to the fact that from their designated snipers, all the way on down to their rank and file street officers - these guys can't shoot. I should be happy, I suppose, I have been carping at the officers that use our club to train - they should ALL have AR15's. They should ALL be skilled marksmen. Their qualification shooting is laughably inadequate.

The problem is, we are sending Officer Friendly into tactical firefights, unprepared for an adversary that IS prepared. And yannow what REALLY burns my butt about all this? They HAVE A FUGGIN GUN REGISTRY THAT COST 2 BILLION DOLLARS AND WAS SUPPOSED TO PREVENT CASES JUST LIKE THIS. 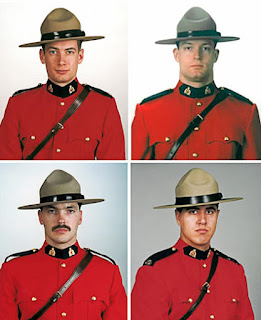 The next time some anti-gun goof starts yammering
about gun controls - asked them why the controls they have
- and paid through the nose for -
don't work!


In close quarters a pistol trumps a rifle any day of the week and twice on Sundays. It's faster and easier to use and it is every bit as lethal as a rifle or carbine - if you know how to use it. Learning proper pistol craft takes about a year. Once you acquire the skills, you need to stay on top of them. Pistols are great for discrete self protection whereas carbines and rifles can set people on edge. 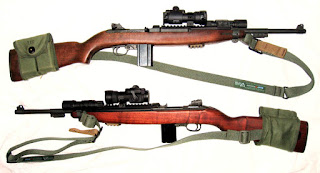 The M1 carbine was invented in WW2 for cooks, officers,
administrators and non-riflemen
because they weren't able to shoot pistols accurately.
No self respecting soldier or law enforcement officer should
be in need of one of these.

I'm not going to knock the carbine; I've had them and they make sense for law enforcement, squaddies, and sportsmen that play the run n' gun games where the targets are big and close. They might make a good option for a truck gun or house gun for the wife who isn't inclined to the rigorous shooting required for top flight pistol skills. As a moderately skilled pistoleer I can now make hits at 75 yards. With a carbine I can stretch that out to 150 but at ranges like that I would much prefer my rifle to a carbine.

If you do your homework with the pistol, you won't need the carbine. The guys at Moncton and Mayerthorpe were all shot at well within pistol ranges. Your homework assignment is to read everything by the late Jeff Cooper - he was a true conservative intellectual and rifleman. Fortunately Rob Leatham is still with us and he's taught some gunnies to shoot even BETTER than he did.

Contrary to the liberals, we are not a nation of pussies and children and we shouldn't let them make us that way. We are intelligent, responsible men that may have to look after ourselves and our families in the absence of the law. It would behoove us to develop the skills that may be necessary for the job. Take that pistol out of the drawer and learn how to USE it - to it's maximum potential.