Labour Day weekend is a good time to finish off the summer and start thinking about the important stuff in fall - like deer season. I gave up hunting a few years back because my back decided to stop working and I became close friends with chronic pain. But the chiroquack started chipping away at the problem, I started eating right(er) and excersizing a bit more - but I have a long, long way to go. This weekend was a write-off, health and welfare-wise; I gobbled too much good camp food and drank too much too. 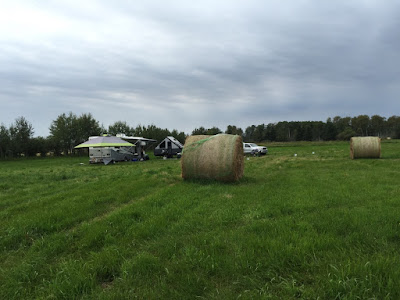 Our hosts this year are gazillionaires that own a couple sections of prime hunting land. They gave us permission to set up camp in the back 40 where we could drink, stink - and poke around to see where the animals are moving. 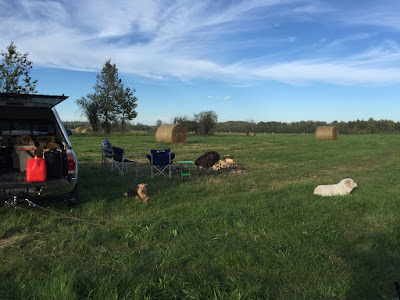 Mort and Macey are old hands at camping now. They ate and probably drank too much too. They ate bacon, beans, and a pile of other stuff they shouldn't have, and they did the dishes as well. When night fell the coyotes started singing and my damned dawgs started to as well! Then the drunks started yowling too and we didn't hear any coyotes after that. 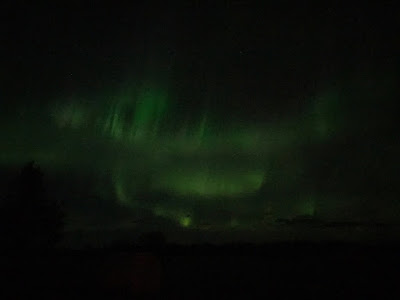 It's hard to see 'em in these crappy cell phone pics, but the northern lights put on a show for us and danced across the sky. I had always thought that was a winter thing, but apparently not. M used up most of our firewood that night - she had decided the night called for lots of wood, lots of booze and lots of good cheer - and nobody could argue with that.

The next day the land owners showed up and I loved them the minute I met them. They are upper class types that own all the land we plan to hunt and camp on, plus properties down in the US and elsewhere. They don't fit the stereotype of the snooty upper class - he was a talkative gent who loved the idea of us camping and hunting on his land, and she was a happy, regal mature woman that loved her daughter and son in law and was happy to chat with the wife too. 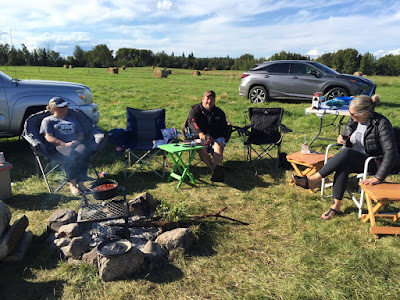 The old boy took us round to see the sights and get the lay of the land. He had bought this patch back in the 70's where as before, it was all homesteader land. We saw the home of the people that sold him the land - a slowly collapsing, sad old relic from days long gone. 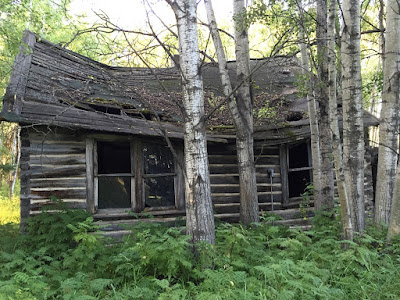 This cabin is slowly being reclaimed by the forest. The story is that 10 years ago some other hunters were out on this patch - an 82 year old and his son in law in his 60's. The old fella was parked at this cabin while the son in law went around to drive some deer out for him - and the old geezer shot him in the leg and he bled out in minutes and died. We were sternly told that we would be in deep chit if we pulled a similar stunt ourselves. I'm not worried, I learned ya don't shoot until you're absolutely sure of what you're shooting at.

When we got back to camp the ladies had a cut throat game of Ladder Ball going and M's mom cleaned house on the rest of us! That game is tougher than it looks - at least for me. I won't play it anymore because I am real good at profanity now and don't need any more practice. 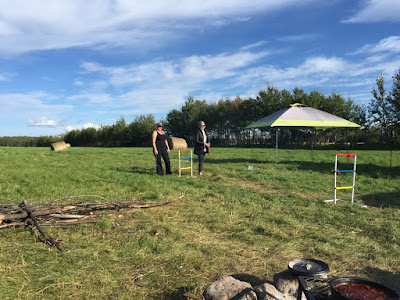 I guess the neighbouring land owners saw all this mayhem and decided to check us out, and the old neighbours just seemed to move into our camp and take over. I was delighted to just sit back, sip my beer and listen to them BS about the old homestead days and people long gone. I was over at Gorges Grouse's blog this morning and he said something that just seemed to capture the weekend for me: "Family is where you find it these days." Welp, for one night - the first in a long, long, LONG time - I had a family. The seniors provided the entertainment for free, the wives cooked over the fire and kept our glasses full, and all was well with the world. I hope to see them again, it reminded me of better days and better times with my own family.

The next morning I got up to take the hoople heads on patrol and we discovered cows. The dogs barked them up and then we moved on and found a little chapel hidden down the road. 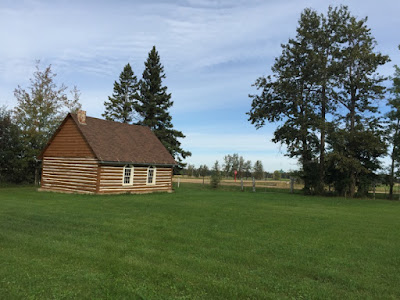 It's a very rough, rustic building that is still hanging in there... but it is going to need work soon. It has a sad little graveyard - I suspect that most of the people that built this church are probably buried there. It was an odd yard - I found a stone with what appeared to be rhunes. I have seen lettering like that associated with Vikings but what do I know of such things?

All in all I had a fun but unproductive weekend. I never did get round to scouting the lie of the land other than noticing a few minor game trails. I have a lot of prep to do before hunting season so I guess I had better get cracking. Good lord I'm old - 10 years ago I woulda had the scopes zeroed, the hunting rounds made (chit I still have to do that), and been champing at the bit for opening day!

Old farts is gonna fart about I suppose.

Have a great Tuesday.