Iechst ze birchzcht de roggenzehagen everyone! Betcha didn't know I was bilingual didjya? It's german, and it means "Welcome to my shop, ladies and gentlemen, I'm so glad to have you here!" Errr... or maybe it means "pick my butt till it turns bright orange..." I'm still struggling with the language a bit... But I digress! Indeed I am bilingual, and I'm hard at work learning the happy li'l retards of Uncle Bob's School For Wayward Boys N' Retards everything they need to know about speaking German!

I know what you're thinking too: "Filthie, why are you teaching the slow kids German, and why did ya give 'em all Schmeisser machine guns, potato masher hand grenades and swastika arm bands?"

LOOK OUT!!! Great Ceasar's ghost - watch out! Quartermain you asshole - watch where you're driving you wisenheimer!!! Dumbkopfff! Don't you give me the finger, you little bastard! Bah - I'll deal with him later - Quartermain is going to park that Panzer tank over the sandbox. Seems like BW and WL had a little mishap in our improvised grenade pits and left nothing but a smear and a crater! I figure Quartermain can park the tank on top of the mess - and no one's the wiser! HAR HAR HAR!!! 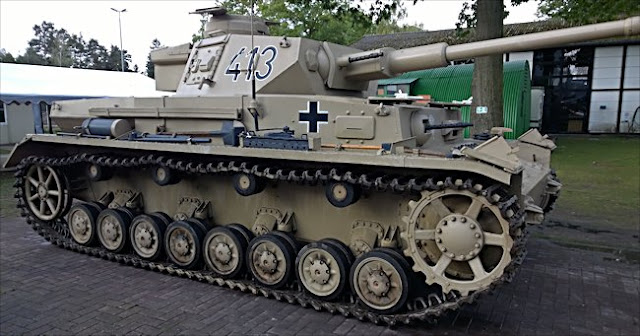 Isn't she a beaut? Quartermain will drive, Pete and Jack will be on
the guns and the cannon, and I
will ride in the hatch up top and sneer at the gutless fwench
swine when we invade Quebec.
It should be a most interesting field trip!

So - getting back to our discussion: why are me and all the other retards going fascist? Why - because everyone's doing it!!! All those creeps at Antifa? The ones that smell of death and excrement? They're telling us that if we don't agree with 'em and don't vote for creeps like Hillary Clinton or Turdo La Doo - we're fascists! Everyone knows that! Even up here in Canada you can't swing a cat without hitting a fascist! Canadian shitlib fartsucker former liberal big wig - Warren Kinsella was taking a dump in the boy's bathroom at the hockey arena years ago and found a swastika scribbled on the wall (Quartermain probly did that too, the little chit) - and even wrote a book about all the hatey fascists round here!

I dunno why Warren is getting so worked up, really. Truth be told, he should probably be enrolled with all the other special ed kids here in my school!  :) Warren, like all liberals and stupid people, thinks that if you're conservative and sensible - you're a fascist too. For a sensible take on political left vs the political right and how fascism fits into all that - I heartily recommend some sane  discussion on the subject, served up as usual, by none other than the ubiquitous Z Man with this stellar piece - The Nazi Tar Baby. I really need to get him up on the Toilet Roll with the other blogger celebrities. He reminds me a lot of the late Uncle Bob.

So... what would Nazi North America look like anyways? Here is one artist's conception:


Why - isn't that great??? Can you imagine cleaning up
Detroit, New Orleans, and pretty much all a California
and even Morontario?
Aaaaahhhhhh... polite and courteous negro servants, clean streets...
And maybe a fashionable lamp shade
made out of Quartermain's hide...? HAR HAR HAR!!!


I suppose I shouldn't be a wank. It scares the morons and that probably isn't the best thing to do in today's volatile political climate. But this is exactly what gave rise to fascism: broken down communities, unemployment,  failing families, and hopelessness - the kind of things liberal morons are hard at work creating today out of sheer willful stupidity. And, as things get worse and worse, and idiots like Kinsella and his crew get ever more abusive and refuse to take responsibility - clean streets, order, and purpose become ever more appealing. I hope we're smart enough to avoid a repeat of that particular episode of history... but the situation's looking grim as identity politics take over.

I apologizr - this post went for a dump real quick, as things usually do when discussing liberals. Let us dispense with such unsavoury people and enjoy a reminder of a better time when we were all better people.

It's Sept. 11 today. For my American friends - be strong, be of good cheer,
and God bless America.
Never forget.