Good to see Jack's hard at it and keeping his skills up. A pint of bourbon will probly tighten those groups up a bit Jack! HAR HAR HAR!!! HAR HAR HAR!!! I suppose I shouldn't be a wank. He's doing as well as I am and with a little more work he might be putting the boots to Big Mike too. As for the rest of you - DON'T SHOOT CHEAP CHICOM/FOREIGN SHIT IN YOUR GUNS. Roll your own! It's fun and you'll pay off the investment on your press in the first year!


Mike B. has a cautionary tale about running cheap foreign
ammo in your guns.
I won't shoot that bargain basement shit in your guns, never
mind mine!
It serves him right, actually. Mike should be smarter than that.

Last week I promised to keep you in the loop with my adventures on the reloading bench with a safe queen I had found kicking around in the back of my gun safe - a USMC M40 LSS. (For those of you not in the know, the M40 LSS is the latest firearm for the Jar Heads: M40 Light Shithouse Sniper). It's going to be issued to every platoon's Designated Stubfart whose job it is to bitch at the kids and razz them as they try to to their duty!) Why - I would enlist right now were it not for the fact that I'm a chicken!  :)

Well on Friday when I took my reloads out I completely shat the bed. I mixed up my loads and my targets and after the shooting session I had burned up 40 rounds of ammo and only succeeded in making an ass of myself. So I went home, punched out primers and resized and reloaded my brass.

Only thing was - I pooped the bed again! In a fit of rage I noticed I had used the wrong loading data half way through my run - and found myself taking shells apart the same way Mike was in the vid above. I shouldn't bitch - at least I caught it and just had made more work for myself. But mixing up load data? That's how idiots blow their own heads off! It's the second time in 30 years that I've done it, and that is why I check and recheck everything several times in a production run. So - after chimping out in rage and throwing a serious temper tantrum... I finally got a box a shells together and headed out. I figgered I would just work with the Shithouse Sniper rifle for load development and plink with the AR15. 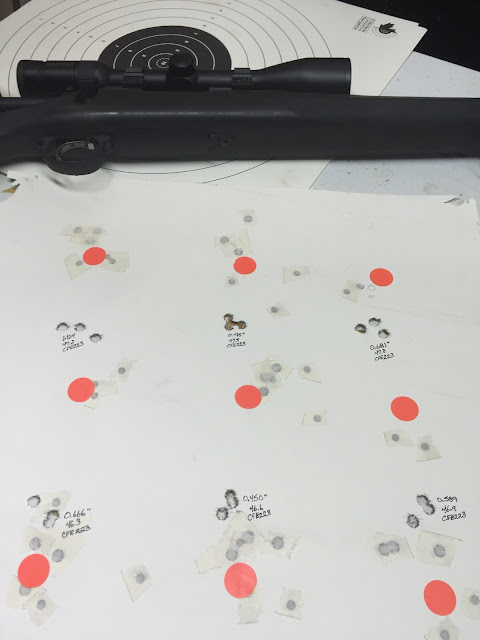 We're playing with CFE223 powder, CCI primers, Hordady brass and Nosler 165 gr. Ballistic Tip bullets. Pretty much everything ran between .5 and .9 MOA except for that one group on the upper left where I think I dropped one. I originally bought the CFE223 to burn in my AR15 because Johnny was having some spectacular success with it. Preliminary work has my AR indifferent to it... but the Shithouse Sniper seems to have taken a liking to it. 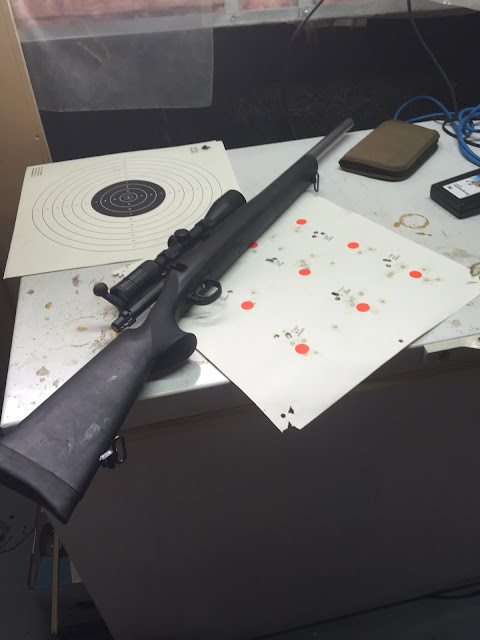 Gah. Fuggin bolt guns. Ya gotta be careful because these damned things
will grow on ya and you'll start to develop an affection for them.
By rights a crank like me should be shooting a falling block single shot,
or perhaps a manly lever gun.
If I'm still employed next summer I may rectumfy this unsavoury
situation.

Didn't see any pressure signs on the brass... but I think my extraction was starting to get a little sticky on the last two groups. If you are going to use CFE223 - watch your brass like a hawk. The boys on the gun forums say it approaches it's maximum pressures really fast and my experiment proved it - in my gun at least. Yours may be a different story - but please use caution all the same.

After I finished my homework I started shooting off my hind feet and just had a remarkable day. The kids all thought I was some kind of ace because I just smacked the livin' crap out of the gong and my shots all went where they were supposed to. The other stubfarts wanted a closer look at my guns but didn't want to humble themselves by having to ask. Of course I was a complete dink about it - I acted cool and modest like I shot like that all the time - but I know full well I can go out there tomorrow and stink the place out! The gun gods are not gentle with braggarts.

So... we have the bolt gun under control. Now all I gotta do is figure that AR15 out...