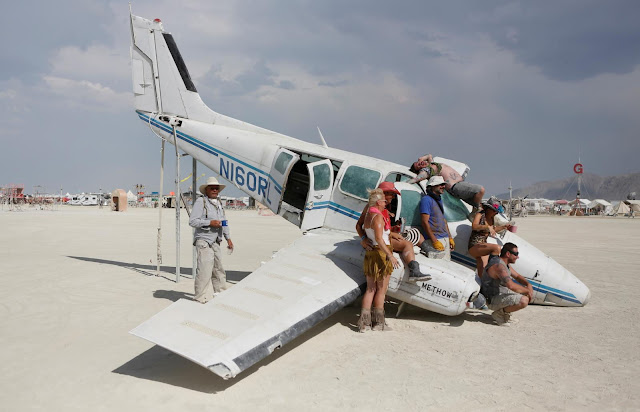 Hmmmmm. Yikes, twin engine? Plus retrieval and salvage? How much, aviators? $200,000+ ??? Somebody just took a major financial hit! A lot of people don't understand aircraft. Sure, they know the principles of flight but they don't understand the transition the plane makes when it goes from being an airplane to a ground vehicle - and it does that in an instant. When the pilot lands, he essentially stalls the aircraft on the runway and his finesse in doing so is the measure of his skill.

If you have an engine out and you are going down on whatever is in front of you - you have a choice: go in hot and fast so that your control surfaces have response and authority - or go in slow, and 'belly flop' the airplane in a stall. Depending on the terrain it's a crap toss as to which is better and anything can happen. If you walk away from something like this it is because God loves cowards, fools and little girls.

When that jet crashed in the Hudson River years back and all the crew and passengers survived everyone wanted to shower the pilot with praise. I don't want to take anything away from the pilot or the crew - they did a text book controlled crash and deserve all the praise in the world for that... but the second that plane hit the water, the pilots were no longer in control at all, and everything from that point forward was in the hands of our Maker. A rogue wave, a smidge of error in the vectors involved - and that incident could have gone the other way in less than a heart beat.

Crashing takes a huge psychological toll too. Years ago my career as an ultralight pilot was cut short by a gentle crash in a field of standing Canola. I will never fly again. I can fly commercial but landings leave me sweating and exhausted as I try to hold my mud on the inside. I darn near pooped the theatre seat when I was watching a movie about Howard Hughes - who crashed at high speed in the worst places a couple of times.

A couple years back I took a discovery flight in a Cessna 174 thinking I was ready to get back in. I did a few turns and went up and down a couple hundred feet and the pilot asked if I would like to land it too. I lined up on the runway and let the instructor cut the throttles back a little bit and brought the plane half way in. Of course, the pilot took the yoke back a couple seconds before touch down. Afterward I was white as a sheet, soaked through in sweat - and the instructor was shocked. He thought I was a natural  because I had done so well. For me it was a sheer test of my mettle and nothing more. I have a phobic fear of flying now and it takes every thing I have to control it. The real pilots and aviators are the guys that can get back in the cockpit and do their jobs after an incident like that. For me though, the thrill is gone and has been replaced by fear.

It's probably for the best.