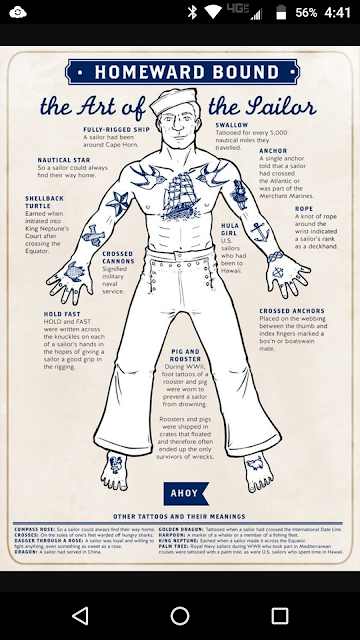 When I was a kid my Grandad had the worst tattoos I had ever seen. I'm not kidding - they were ghastly. Gramps was not a swabbie, he was a doughboy in WW1. The tats obviously meant something but he never told us. He seemed ashamed of them. There were nudies and mermaids and some other stuff I couldn't make out, they were so bad.
All Dad could tell us was that a bunch of them probably got pished up on leave and went to the bar and tat parlour.
I am probably the only man in the world without a tattoo. I always wanted one as a kid but never found the time to go down and get one. And now that I'm an old fart I just don't see the need for 'em.