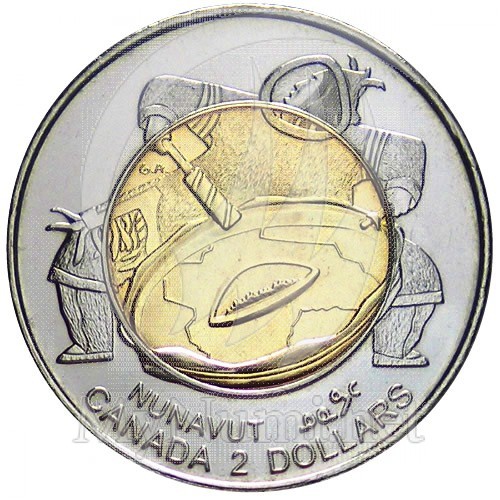 Good gravy! Lookit what I found in my pocket this morning! I thought the bloody British were bad - does anyone know how their money works? Cripes, they got bobs, quails, quids, crowns, tuppences and then something called the pound sterling. Hmmm... an ounce of silver is what? $18.00? So why is a pound sterling worth a buck eighty Canukistani? Those guys are a currency headache by themselves - and we in Canada are going the same way. We did away with the Canadian penny awhile back because it is essentially worthless and we can pretty much make the same argument for the nickel too... and that should tell us all something. Hell, we can probly even make the same argument for the dime!

But as our money becomes more and more worthless, it gets ever more flamboyant. I'm thinking this ethnic abortion is a Canadian two dollar coin. The Franklin Canadian Mint is enthralled with the demons and gods and oogah-boogahs of first nation freeloader mythology and this one celebrates the new Canadian Territory of "Nunavut". Apparently three people live in NoneOfIt and subsist on the dole or something - but they are ever so culturally unique and different that we must celebrate them on our currency dontchya know! HAR HAR HAR! Years ago we had to redesign the $5.00 bill because of political correctness or something and I had enormous sport with it: I went on a political forum and told the liberals that one of the people on it was a shik with a turban...and they LOST their mud!!! "It's a Canadian veteran, you idiot!!! He's wearing a beret!!!" they screamed over the internet, "and you're a fuggin racist!!!" HAR HAR HAR! I got banned when I replied that I hate everyone equally...

I have to admit, I am well and truly stumped. I believe, as do many others, that our economy is a growing house of cards that could topple at any moment and dump us back into a recession or even a full blown depression.  In my circle I am considered a quack for thinking so - most of my friends are spending like drunken sailors and aren't saving a dime or prepping at all. Our banks are not as pozzed as the American banks but our idiot prime minister and his fart catchers have done some things that raise what's left of my hair: they sold off ALL of our remaining gold reserves (our currency is now backed up by European bonds, so I'm told, which is utter lunacy if true) and they quietly legalized the judicial machinery that will allow banks to give investors the same 'haircut' that the banks in Cypress did with their clients.

I dunno what I as a private citizen can do about all this. Prepping? I can just see how that will go in this idiot country - "Why should the young couple down the street with a baby go hungry while you gorge yourself on your hoard, Filthie...?" In that situation I would LIKE to think I'd reply with gun fire...but there's that baby thing. Being a sportsman and a gentleman I would probably be one of the first ones looted by the mob!

Hoarding cash? Stacking precious metals? I have done some but not nearly enough to support me for any length of time. My cash is losing value as it sits in the safe. I dunno what my silver is doing, nor do I know what any of it will do when the bottom falls out. I am overly invested in brass and lead, if ya catch my drift... but what value is that? Look at Venezuela, where EVERYONE is taking it in the shorts.

I'm beginning to wonder if I am the idiot and everyone else is right. Maybe I should go into debt for everything I have and live high on the hog while it lasts on other people's money that were stupid enough to lend me...? After all, if I run out of funds I can always rely on the gov't to take care of me...right?
Posted by Glen Filthie at 07:17