Welp – it was Turkey Day up here in Canadistan over the last week.


Family holidays are tough for me, even with my own family. It seems to me that lately, everyone is fuggin nuts. Add to that – that I am not really a family man in the modern sense of the term. There seems to be some kind of rule somewhere that if a family member is doing some kind of wrong – you are obligated to go along with it, pretend that the wrong is actually a right, and keep your goddamned mouth shut even if the lie of it is staring everyone full in the face.  And everything’s political now.


I know that for Thanksgiving I would have been egged by my parents because of my horrible gun addiction. “How can you even own an AR15 after what that loon did in Las Vegas, Glen? If Trump weren’t such an idiot he would have banned all the guns…!!” I can’t even bring myself to fight with my parents on that anymore. They don’t get the fact that evil walks the earth, and that if these guys don’t have guns, they’ll make nail bombs out of pressure cookers. Or fertilizer bombs. I can only imagine what my shit lib mother thinks of those multimillionaire black baboons in the NFL that are dissing the flag and the nation because of how shabby they’re treated. Who wants to spend a holiday with people that leave you wanting to choke them to death? I don’t. And my wife’s family? Good lord, they get their morals, ethics and politics from Orca Winfrey and day time TV and it was open season on me at family gatherings. I became literally worse than Hitler because of my wrong opinions about queers, feminists, Marxists and liberal morons in general. I’m pretty sure my last family dinner with them was thanksgiving several years back – and I literally came within a hair of dropping my knife and my fork on my plate and walking out. Listening to those sanctimonious assholes circle jerk virtue signal each other left my blood pressure soaring. Looking back I should have just bailed. If only I’d known then what I know now.


On Saturday I puttered about in my man cave, snoozed and was a total waste of skin. On Sunday morning I was booted out of bed, shat, showered and shaved – and dragged to church by my wife. I figured I would snore and fart my way through the lecture like I am prone to do when the pastor starts droning – but today Jim had the pulpit, and when a man like Jim speaks… I listen. He’s 66 years old and looks 15 years younger. He’s one of our county’s last viable dirt farmers – the yuppies have over-run the rural countryside here and most of the small family farms were subdivided years ago. He’s about 6’6” and built like an army tank. He isn’t a scholar, he isn’t sanctimonious or stuck up… he’s just a big strapping man that loves his family and his community and his faith and isn’t shy about it. He’s a better man than I am and no bones about it.


For a big man he’s very quiet and his message was very simple. He told us all that in this little chapel, we were all accepted. Whatever corners we had cut, whatever mistakes we had made, whatever sins we had committed – it was all forgiven, water under the bridge. All we had to do was accept the word of our Maker and His Son – and give thanks. He told us to look hard at our problems and see them for what they are… and what they could be. It doesn’t sound like much when I write about it – but that man spoke like I’ve never heard anyone speak before.


I fear I had something of an epiphany, there in the back row, furthest from the pulpit. God doesn’t talk to me. I THINK I’ve felt his hand in my affairs once or twice but who knows? It’s entirely possible my Maker is far too busy for me and has His hands full just making things run. Maybe He does talk and I am just deaf or blind. 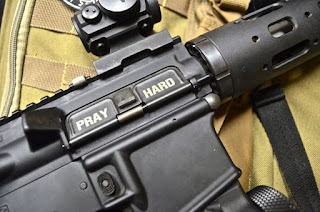 None of the Christians there at the chapel seemed to give Jim a second thought; they have tight families, beautiful kids and being accepted and loved is nothing new to them and they just worry about being good folk. They go through life day by day like that. No vicious head games, no lies, delusions or fake narratives. No cheap shots, no cross checking or high sticking. Being with them is about getting along rather than scoring points. Family squabbles? Losing my temper because stupid people were acting stupid? How smart is that? Their problems were all self inflicted – as were mine. There’s people out their coping with REAL problems. It’s time for me to let some of my piffling little tempests in a teapot go.


After church I went to the rifle range and was it ever crappy out! The wind howled, I shot like dirt and then just gave up and put the rifles away in disgust. Afterward I took a few seconds to sneak down the Black Powder Trail where nobody could see me and I got down on my knees the trees and the leaves - and gave thanks. I know my family would have laughed and mocked along with any number of others – but they have problems of their own and if my biggest problem is sneaking away to thank my Maker for a great Sunday… I’m good with it. I shoulda asked for some help with my marksmanship, come to think of it…


Flapz and his wife were out camping so I went over there and was joined by my wife later and we had an informal thanksgiving supper of sorts – an afternoon plate of crackers, cheese, sausage and nibblies by the campfire. I had a beer and a coffee and it was all good. The trees sheltered us from the wind and we had a few laughs.


It was a simple little Thanksgiving up here in Alberta – and the best one by far in a long, long time.
Posted by Glen Filthie at 11:21