I Am Still Going To Kill Some Marines.... 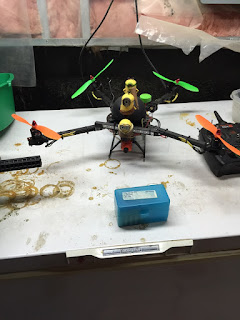 From the link above I am still going to conduct that hypothetical thought experiment in which we will use a small hobby drone to rain death and destruction down on victims below! I've had some complaints about my tardiness and I apologize. I wanted to see if I could hook up and program a separate servo to actually drop our 'bomb' on it's target - assuming I could get the payload aloft. Sure it can be done - but I would have to pull the Crapcopter completely apart and rebuild it and buy a new 9 channel radio. Too much bloody work for me but now that I think about it I would need several to drop a grenade. The drone would need to pull the pin AND drop the grenade. How to do that? I've never handled an M67 grenade because guys like me shouldn't be trusted with sharp tools, never mind grenades! HAR HAR HAR!!!! Are any of you guys squaddies? I would assume there has to be some kind of safety mechanism to prevent the pins from being pulled by accident, right? I suppose that becomes another line of discussion in all this: how many channels would I need, and what are the mechanics I need to employ to arm the grenade? It may or may not be valid to assume that if the task is too complicated for me to bother with it - it would be for Jihadi John too. Will the Esteemed Members Of The Peanut Gallery allow the assumption that hobby drones cannot be used to drop grenades? Let us assume instead that the hobby drone will be used as an expendable part of the attack scenario, ie: we will improvise an explosive charge the same weight as an M67 grenade - and fly it into the hypothetical Platoon of Marines and the drone will be lost in the explosion. Can we accept that? If so, I will attempt my first sortie with our simulated explosive payload tomorrow and I'll let you know how it goes.

In the meantime, we need to understand the realities of small explosives on human beings. If I remember correctly, Larry Vickers is a former Navy SEAL, or a Ranger or some such, and he knows his way around small explosive munitions. As I watched the vid below it drives home how inefficient these things really are: you literally almost have to drop these things down the shorts of your foe to kill him. Watch the vid below; and think about it: you are the terrorist in this experiment. You are walking in his shoes. Do you REALLY want to wound a United States Marine? Never mind his buddies in the special forces  - they are even MEANER than the jar head is! For me, I would rather hunt and wound a black or grizzily bear than the Marine because unless he goes unconscious - the Marine can think... and he is going to want pay back!


So hopefully this opens a few eyes. Yes, you probably can jury rig a drone, and fly it into a platoon and maybe kill or hurt a few of them - but this is not the terror weapon that the bedwetters and panty waists were crying about. By far - the most serious damage these things have is on morale and as usual the slobs in the media are doing their best to help out with that.

PS - I think Quartermain pooped in the workings of the blogger machine again! My fonts are coming out wonky and I can't seem to edit today! Maybe we should set him up on the grenade range to teach him a lesson...! Hope you're having a great weekend...