Allahu Akbhar, all you American and Canadian pig-dogs and Satan worshippers!!! Allow me to introduce myself: I am Abdullah Oblongata Abu Al Fuknuk-Al-Filthie: Hammer of Mohammed, Sword Of Justice!!!!

Okay! Alright, already - I am Glen Filthie: Stubfart Emeritus Of The Internet and general nuisance gun club duffer. Awhile back I got in a pissing match with The Pastor and his grumpy old cohorts over the subject of hobby drones: the old hens were all a-flitter and feathers and flapping was going on over the subject of hobby drones. Apparently, the rag heads were buying hobby drones from Amazon, loading them with explosives - and dropping them on our hapless Marines n' squaddies in the sand box. Other old geezers clutched at their pearls and gobbled in fright about how the drones could lift up copper bars and cables, drop them across power lines, short them out - and send us back to the stone age. Another one talked about using them for biological warfare! As the chicken manure piled higher and higher the boys worked themselves into a righteous tizzy! Personally I think the boys are scaring themselves. When I tried to reason with them I got a wedgie and then Pete got one hand on my collar, the other on the back of my belt - and I got the bum's rush out the door!!! HAR HAR HAR!!! 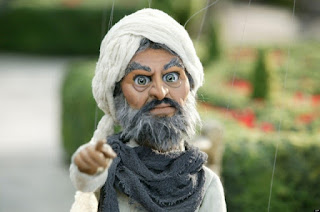 These idiots are flummoxed by the workings of a flush toilet.
If you were evil and connected - would
you sell them biological weapons and WMD's?

I pointed out to the boys that small hobby drones have payloads measured in grams and tried to get some kind of clarity on how much lethal payloads actually weigh... but by that time they were laying eggs and clucking about all kinds of self inflicted nightmares. Yannow - the rag heads must just be rolling with laughter as they undermine and sew the seeds of the destruction of our western civilization. They aren't doing it to us neither - we're doing it to ourselves. Imagine: grown men... frightened by toys! Sheesh!

But - rather than fight about it - I figured we need to get some real world data on it because the mainstream shit rags sensationalize everything to sell copy and frighten their subscribers. We need to suss this out for ourselves. I am going to resolve this argument one way or another by trying to simulate an experimental version of an attack drone. I strongly suspect we are going to find out that this is just more yellow journalism being used to stir up men that should be smarter than that. 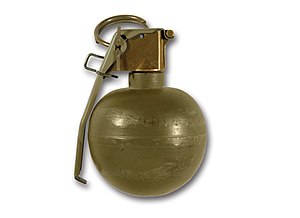 This is the M67 fragmentation grenade currently used by our squaddies
for social calls and formal occasions
where our friends are in very close, confined quarters - say a goat shed... say 5 meters or less.
I have a weight on it of .397kg - or 397 grams.
For the sake of our experiment, this will be the benchmark hypothetical
ordnance we shall use and try to simulate. 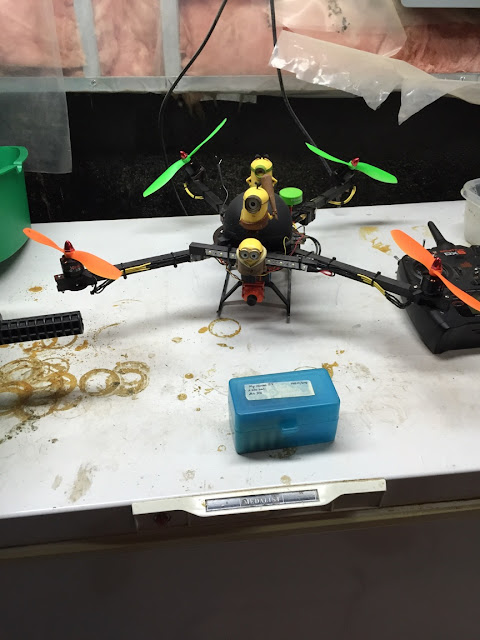 We are going to try and simulate an improvised attack/hobby
drone with what we have available.
The Minions and I went out into the wind for a check out
flight - the first one in months.

So - I need to see if the Crapcopter can even lift a grenade sized payload. I wanted something easy to affix to the drone. There is more to this than just duct taping a grenade to a drone - like all aircraft, the load has to be balanced and the centre of gravity for the drone and the payload will have to be perfect for it to fly. My drone has a microprocessor co-pilot that will help with this but it is by no means perfect.

I have to simulate the payload here and I wanted to use something harmless like juice boxes or something - but I don't have anything. So - we'll use something I have lots of: ammo! 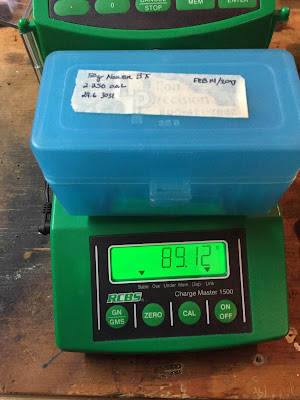 One empty ammo box. I like this because it should be easy to
center and balance the aircraft. 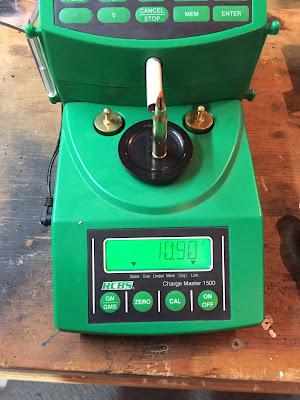 One 223 shell weighs approx. 11g.
28 of these, plus the blue plastic box should
weigh approx. the same as
one American M67 fragmentation grenade.

I can hear the pissers, moaners and bed wetters already: "Filthie! Are you fuggin nuts? Putting live ammo on a friggin drone?!?!? What's wrong with your head...?!?!?"

First: Calm yourselves. I promise I will keep the drone slow and low to the ground and I will be extremely careful. I will be flying out in a remote field outside of town - I have my doubts if this will even get off the ground. It's gonna be close one way or another. I also like that I can affix the payload to the drone without any serious modifications to it.

Gentlemen, we have everything going on here that an Air Force aircraft loadmaster has when he is transporting tons of materials on those big Hercules cargo planes - the only difference is a matter of scale. The load can't move around, it has to be centered - or the bird crashes. The only difference is I will have a crashed toy. When the flyboys poop the bed people die. Again - I promise to be careful - I want to shoot that ammo in a gun, not blow it up in some Darwinian catastrophe.

That raises another point in my favour in all this. Consider - you are a fig farming goat feltching jihadi that's hellbent on killing Americans. You have no concept of how indoor plumbing works, electricity and you wipe with your hands.... Are ya sure ya wanna be messing around with high tech drones and high explosives, Mohammed?

So all I gotta do now is affix the payload - and fly it!

(Errrrr... if anything happens to me can you guys see that Jack doesn't clean out my liquor cabinet? I want to be buried with my scotch....)