The REAL Danger Of Hobby Drones (And a BARF Post)


Good lord I'm getting old. No doubt if I was 16 I'd be telling guys like me to FOAD! (Mind you, Pete and his cackling hens are old farts and they tell me to FOAD too! HAR HAR HAR!!!) Of course they were all going off about little hobby drones dropping grenades, bio weapons and worse. It was all hogwash, of course, getting any significant weight or payload in the air is not possible with your average hobby drones - it takes a serious machine, costing many thousands of dollars and high priced, high tech video equipment before you can even begin to become a serious threat with a weaponized drone. I will concede that price point is coming down, though.

No, what concerns me about this hobby is stuff like this:

These kids are playing with fire. Their electronics are top notch. Their drones are balanced and trued to fly right to the limits of the pilot's ability - and there is no doubt that these kids are very, very good at what they do. The average slob is not capable of flying like this.

I am all for the stunting and pushing those machines to their limits and beyond: but in the right place.
These things crash all the time. They run on cheap Chinese electronics for the most part and if you lose a motor or an ESC - that drone is going down on whatever is under it. One of these things hitting your car at those kind of speeds is going to do serious damage. If a pedestrian is hit, they are going to the hospital or the morgue.

If you fly one of these you have all the responsibilities of a regular pilot. If a private pilot did stuff like thAT, Transport Canada would throw the book at him and he would probably do time in prison - and rightfully so. You HAVE to keep these things away from people and that's all there is to it. The bigger they are, the farther away you need to be from people and property. 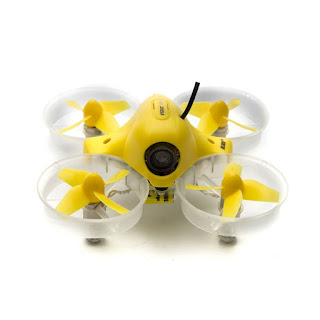 This little bugger fits in the palm of your hand and couldn't hurt anyone.
Nevertheless you still are obligated to
respect your neighbours.


I even got busted myself. On Friday I flew my little slow poke indoor quad outside because it was beautiful and calm. I flew over the neighbour's front yards and their cars and thought nothing about it because mine was only a little one - if I hit one of the boys with it he'd swat it and step on it and think it was a bug! It was far too small to hurt anything it might fall on. But the wife caught me at it and gave me chit: you don't walk over your neighbour's front yard, so ya darned well don't fly over it! It's bad manners. I'm glad she caught me and pointed that out; I forget that a lot of people don't see these toys the same way I do. (But I DID buzz some little kids with it in the park across the street - they were delighted by it and we all had fun).

Remember what you're doing and respect others. Keep it FUN.
Posted by Glen Filthie at 08:33