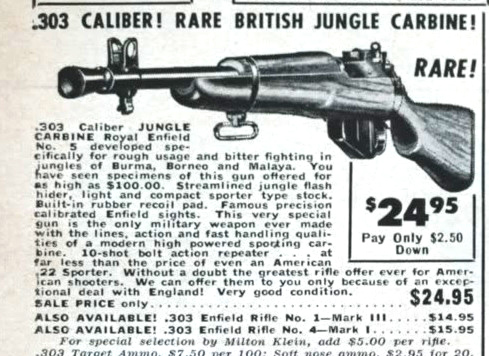 When I was a kid we all had Enfield .303's. Yannow the friggin Yanks are always carping about their '03 Springfields and their M1 Garands... and they ARE nice guns... but the Enfield's were mighty fine milsurps too. Up here in Canada, back in the 60's nobody in my circle could afford a fine Winchester or Remington sporting gun. All our dads had was Enfield's or maybe some handed down lever guns.

My dad had one like the one in this pic and he sent it to my grandfather for safe keeping because us kids were always playing with it. Grampa was a doughboy in WW1 and I never found out what happened to that gun. Grampa M. hated guns with the heat of 1000 suns after what he endured in the trenches. For him, living high on the hog was puttering in his green house and just having enough to eat.

I bought an old pristine .303 Smelly (SMLE) in high school and hated it because it wasn't flashy and cool like the AR's and Mini 14's the cool kids had. I paid $150.00 for it, and like an idiot - I sold it. How I wish I had that gun today. I have a small fortune invested in my guns - but there is something about the classic mil surp guns that just warms the soul.

Here in Canada, back when we were kings - we shot Enfields.
Posted by Glen Filthie at 13:36