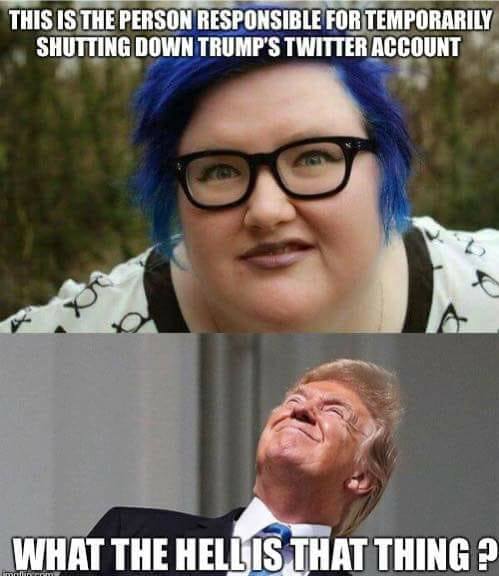 It's a Great Blue Haired Land Whale, Don.
If I were Trump, I would give Twitter the finger and go on Gab. It would
force the leftwing howler monkeys in the media to follow Trump
in a medium that actively hates them and social justice warriors.
They would have kiniptions and it would serve them right!

The Hawaiian Libertarian has an interesting one up about how people live in altered states of reality. The people that hired that blue haired fatty, above - live in an unreality bubble where such people can be considered rational and competent. I can tell just by looking at her that she has more than a few screws loose. After the last 20 years my take on affirmative action is that the only thing it has accomplished is to put inferior people in positions they can't handle - thus justifying the very stereotypes the perps were hoping to dispense with. 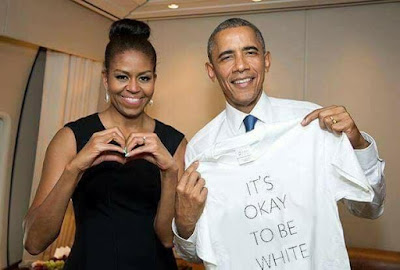 Former President Obutthole and the First Sasqwatch?
Come to terms with their racism and bigotry?
It can't POSSIBLY be a photoshop!

IBefore he was elected, I read one of Obama's books...'The Audacity Of Hope', if I remember correctly.. I had to - because although I can take black people of merit in stride, one at a time - as a group I hate blacks. I'm just being honest here - I don't like their victim politics, I don't respect the way they refuse to take responsibility for themselves, and if some idiot can't tell the difference between talking in generalities or talking about individuals - screw them. Obama's book was ALL about race and that's it. If a white guy wrote dreck like that, he'd be laughed at. But I had to read Obama's books to make sure my own biases weren't preventing me from sizing the man up fairly. I got halfway through his book before I threw it in the garbage. I had hoped I was wrong about him, but sadly I had him right down to a tee. In his bubble, EVERYTHING is race. You had your fun with affirmative action in the Whitehouse, America - now would be a good time to wake the hell up.

I refuse as much as possible to live in bubbles if I can. I'll eat a Big Mac knowing full well that Rotten Ronnie is trying to kill me with it for fun and profit. I have no illusions about it. I can drive and talk on a cell phone and do all the time. People that rail against smartphones have a point but it only goes so far - those damned things have so much functionality now that guys like me don't have to carry around briefcases anymore. Between my cell and computer I can effectively manage a client base of over 3500 customers. No day timers, no business card indexes, no note books.

I signed my mortgage knowing full well I was signing up for serfdom for at least 5 to 10 years. We bought a house we could afford, knowing that we would want to retire some day and that our home would not be part of our retirement savings. That $120K mortgage kept me awake at nights too - and most people today would laugh in my face at my paltry debt. Today, though my bills are largely paid. I am not rich, but I am free.

I try to see my world around me and not only that - extrapolate: where is it headed? I do not see The End Of The World As We Know It - is see shit hitting the fan. It may knock the fan over, and everyone near the fan may get sprayed with shit - but it ain't the end of the world. Ya get out the mop and pail, ya clean up the mess - and try and set the fan someplace safe and chase the dung throwing monkeys outside. Most of us will survive - I am, and remain an optimist. 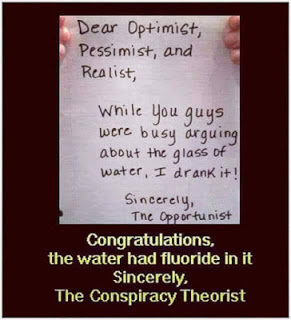 All's well that ends well!
Have a good Humday!