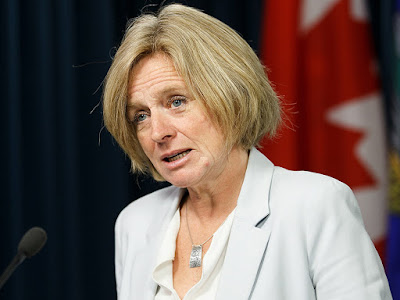 Gah. At least Hillary tried to do her make up and comb her
hair...

I caught the whole shebang over at Small Dead Animals. Ol' Rach is looking a little rough around the edges these days. She's Alberta's premier and like most socialists, she is a career snivel servant. She is a former public school teacher as are most of her cronies. It's scary to think that people like this are allowed to teach children. The late Uncle Bob used to say that "public schools should be burned to the ground, with the teachers trapped inside - and afterward, the earth upon which they stood should be salted..." Rach is powerful evidence of the correctness of Bob's position.

Minus all the drama I see two issues here: first, the eeeeeevil Christians want the freedom to teach their own kids about stuff like same-sex marriage, homosexuality and probably regular healthy sexuality too. Marxists obviously don't want people thinking for themselves on subjects like these, as most of them are degenerates and perverts themselves and hate the church with the heat of 1000 suns.

Also a big part of it - but carefully not said - is the fact that homeschoolers and private schools are producing students that can wipe the academic mat with publicly schooled kids. Most parents would be horrified at how dumbed down our public school curriculums have become. As a man that tutored his own daughter I can tell you that if your kid is failing at school - the problem probably isn't the child - it's either you, the teacher, or both. They won't tell you that, of course. It's easier to blame a child for his failures than it is for a parent to admit his - and no way will a union slob take responsibility or go the extra mile to solve a problem. Homeschoolers and private schools make Rach and her gals look bad - and we can't have that!!!! The fact is our teacher's unions are out of control and they have a choke-hold on our provincial gubbimint. They are going to do to us what we've done to our kids - and it'll serve us right in a lot of cases.

I will let Uncle Bob speak for me on matters pertaining to public schools, their teachers and their unions. When it comes to matters of morality and ethics - there is no way on earth I would let any snivel servant have the last word on teaching them to my kids. As a father of a militant lesbian social justice warrior and an adult cry-bully - I can tell you honestly that the Christians have the right of this. My opposition to the left's sexual degeneracy is rooted in common sense, health and wellness. These trannies and queers are not nice people, and they aren't healthy or happy. Most are miserable and unhappy - and they want to spread it to others as much as possible. I have no time for them anymore.

But - now that I'm an old fart... none of this is my problem. It's pretty clear that I will be looking after myself when I am 75 because our kids probably won't be able to look after themselves, never mind their geriatric parents. HAR HAR HAR! My retirement will probably be a quart of whisky, a fine cigar and a Colt .45! HAR HAR HAR!!! (I am leaving all my worldly assets to Quartermain so you guys can have a party when I'm gone (and please don't let Jack or Pete defile my corpse(and I peed in one of the bottles in my liquor cabinet - you guess which one, HAR HAR HAR!!!)))

While our leaders have all gone effin nuts - it doesn't mean we have to. Keep yer stick on the ice and have a good Thursday.
Posted by Glen Filthie at 06:20